APPEARANCE: Verity has long, brown hair that goes down to about the middle of her back. She is not pale nor tan, but has a fair skin tone. She has shining hazel eyes, and shiny white teeth. Her eyes are warm and kind, and her smile says all. 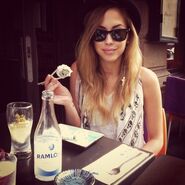 HISTORY: Verity was born in Malibu, Califoirna, to a young, famous dancer and singer. Her mother was a very musical person, and she was born when she was very young: 27. Her mother met Apollo when she was 26, and she told Adalene that his radiant personality wa sunlike any other person she ever met, and being a famous, productive singer, she met several talented people, but they all looked dull in comparison with Apollo.

Verity was diagnosed with ADHD when she was born, but surprisingly didn't suffer any dyslexia. She only remembers Apollo's happy, bright smile from when she was a baby. Her father gave her a very special gift: a beautiful rose gold ring that would later be proven useful. She always longed to meet her father again, but was perfectly happy with her mother. She met several famous people, and went around the world with her mother for her concerts. She pursued her goal to become a famous singer and dancer like her mother, so her mother taught her and gave her lessons.

Soon, by the time Adalene was seven, she could play the piano, flute, violin, guitar, and saxophone, and had memorized over 50 songs and dances. She never kenw that from Olympus, her father watched her with great pride. But what Adalene really loved was the musical, Wicked. She would always sing to the songs, especially "Popular". However, at the age of 10, she was peacefully playing in the park with her mortal friends, when a high-school girl was walking by, smiled at Adalene, and asked if she wanted a ride. Adalene was young but wise, and refused. The girl gave a frightening snarl, and soon her left leg was a donkey's, and her right leg was bronze, and needle-sharp fangs sprouted from her teeth.

Through the Mist, all her mortal friends saw was a police officer harassing Adalene, and they fled the scene fast. The empousa pounced, but luckily Adalene was wearing her ring from her father. She touched the small, tear-shaped ruby on the ring, and it spun off her finger. Soon, she was holding a short but lithe Celestial bronze sword. Typically, a satyress was tailing her due to the fact she was a demigod, and came to her aid. Within moments, the empousa was nothing but a pile of dust. The satyress quickly took her to Camp Half-Blood, and there she developed her demigod skills. She was claimed a while after her arrival, became excellent at swordfighting and archery, and was exceptional at healing. She went to her mother's cottage when school term started and reassured her that for the past few months, she was alive and alright. Then, she decided to tell her mother what she was and where she'd been. Her mother took a long time to process it, but finally understood that her daughter was a demigod. Verity has been at Camp Half-Blood, but goes back home to attend school. Come with me.

Not anymore :) Come with me.

what did the friends see in the mist? when the monster attacked?

Retrieved from "https://camphalfbloodroleplay.fandom.com/wiki/Claiming:Camp/Verity_Damacela?oldid=1236162"
Community content is available under CC-BY-SA unless otherwise noted.