Personality: Victorie-Rose is the friendliest girl in her family. She's kind to everyone she meets, and people find it hard to hate her bubbly personality. She does anything and everything she can to help people, and hates being mean, yet, she's not afraid to be. She also loves to obsess over certain things, and at times, can be nerdy about said things. 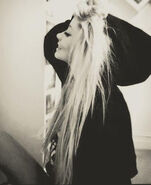 History: Phillipe Latourette and his sister Angelica loved their home in Beynac-et-Cazenac, but both strived for different things. When they were 27 and 24 respectively, they moved away from the village, Phillipe to Ottawa, Canada, and Angelica to Lyon, in the region of Rhône-Alpes.

In Ottawa, Phillipe met a woman who went by the name of Cynthia. Phillipe, being who he was, never looked for a proper relationship until he was at least 30, and ended up having a one night stand with Cynthia. She left, and he soon forgot about her, until nine months later, a little baby girl was handed to him. The woman who he got it off wasn't Cynthia, which surprised him. All said woman told him, was that the girl was newly born that day (15th February 1998), and that Cynthia was Cybele, a Greek goddess. After giving Phillipe his daughter, the woman vanished. He then named his daughter Victorie-Rose, after his victory of moving to Canada, and his favourite flower.

Phillipe adored his daughter, and always took her to Lyon to see his sister and her son, Cáne. Unknowingly, when Victorie-Rose was 8, and after years of having on and off relationships, Phillipe fell in love with Melanie, a satyress. In reality, Melanie was told by a son of Zeus, that a demigod girl would be nearing her attacks soon, and that she should be protected. Over time, Melanie fell in love with Phillipe herself.

The "family" of three enjoyed life, always going to different parts of America to have weekends out and such. When she was 12, Victorie-Rose was attacked by a fire-breathing horse. At the time, the three were in their backgarden. Melanie, following the demigod's instructions, defended Victorie-Rose from the monster. After the attack, Phillipe died of an disease, and Zeus took pity on the satyresses sadness, and turned Phillipe into a storm nymph, so the satyress who had before defended a few of his children, could be happy.

For the next two years, Victorie-Rose still had a few attacks, but with her father and step-mother there, she was protected each time. When Melanie heard of Camp Half-Blood, she urged Phillipe to send Victorie-Rose there, in which he did. At first, the travelling was going well, but before long, a hellhound attacked the car that they were in, and injured Melanie badly. Phillipe was over in Lyon, visiting Angelica, so Victorie-Rose, following Melanie's small training that she had given her, attacked the hellhound with a small dagger, that belonged to Melanine. Let's just say that Victorie-Rose was doing well before she decided to run to the Camp border and tripped up, letting the hellhound nearly savage her, and by that, some nasty gashes and such to her arms and legs. A camper, Beau Chambre, another child of Cybele, ran out and dragged her into Camp, whilst the hellhound's attention was drawn to by Melanie. A few days after going to Camp, she received some weapons (bow and arrows and a small axe), given to her by her step-mother. The bow and arrows were from Cybele, and the axe was a birthday present.

Weapon: Bow and arrows, or a small axe.

Were they close to the border of camp when they had gotten attacked, because it jumps fromg etting attacked, to at the boreder. Please clarify this :)

Yeah, she was pretty close to the border, as it says, "Let's just say that Victorie-Rose was doing well before she decided to run to the Camp border and tripped up, letting the hellhound nearly savage her."

Oh okay, how did she get her weapons? Did she ever see MElanie again or did she die saving Victorie-Rose?

Added a part in for that, and that part is kinda irrelevant to the story, as what happens after, could be predicted, as Melanie is a satyress who'd been protecting demigods for years.

You didn't quiet explain how she had gotten the bow and axe. Please add it, thanks :)

Please add her to the user/characters forum, thanks :)

Retrieved from "https://camphalfbloodroleplay.fandom.com/wiki/Claiming:Camp/Victorie-Rose_Latourette?oldid=1236165"
Community content is available under CC-BY-SA unless otherwise noted.