Name: Vincent Alexander (likes being referred to as Vinnie instead of Vincent so he always tells people that his name is Vinnie) 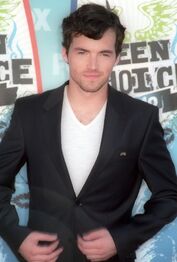 Personality: Very sweet and nice. A bit over protective. Some what cocky.

History: Before Pan went missing for almost 2000+ years, he had several children, and Vinnie was one of them. Vinnie was sent to the Lotus Island so that time would not affect him. But when the gods moved west, he ended up at the Las Vegas Lotus Casino, confused and bewilered on how he got there. Because he was part satyr and demigod, a satyr overseer was looking out for him under Pan's oders ever since Vinnie went to the Lotus Island.

When it was time to leave the Casino (it was 2013 at that time), Vinnie's overseer took him to camp, but was killed by a hellhound while protecting Vinnie. (Before the overseer died, he gave Vinnie quick directions on how to get to camp.) The hellhound was disintegrated thanks to his overseer and what was left of him was his Reed Pipes (now in Vinnie's possession). Vinnie, having a few cuts and scratches, went to the gates of the camp, and collapsed in astonishment.

Camp Life: Vinnie is a junior protector and has helped many demigods get to camp safe and sound. One girl has caught his eye. A demigod named Vanessa Ophelia Prescott. Vinnie helped her from monsters who were chasing her and got her to camp on one of the camp's sailing boats. He gave her a welcoming gift and then left because he had to help some wildlife for a couple of months. After a couple of months, he came back to camp and hopes to spend some time more with Vanessa.

"I was pretty sure if I tried to sing, all I would cause was an avalanche"   -PanPan  (11,326) So yeah, since Pan was missing for a long time, i had to change Vinnie's history a bit.

>.< crap I researched Pan on the encyclo wiki for the books, http://camphalfblood.wikia.com/wiki/Pan and it says he went missing 2000 years before the events in the books >.< soooo sorry >.<

I'll change it and its fine.

So, I changed the history. I hope what i did is fine. plus i really dont know what year Vinnie will be born in since Pan was gone for 2000+ years. >.<

How did Vinnie get to camp? How did he learn of its location? Did the overseer tell him before his final moments?There is a crime, but no criminal. ★❣Broken❣★

How were the satyrs able to break free from the wanting to stay in the hotel? Did the overseer go in with him at the same time, or was he order some time later?There is a crime, but no criminal. ★❣Broken❣★

yeah, the overseer was with him at the same time. (wasnt really clear about that part srry) "I was pretty sure if I tried to sing, all I would cause was an avalanche"   -PanPan  (11,326)

This claim has been approved as a son of Pan, AKA, a satyr. You now need to make a page for them and a word bubble, if you aren't sure how to do this you can see the guide here. Once you have done that you can add your character's name to the cabin list located on the cabin pages and start role playing with your new character. If you have any questions feel free to ask a member of the Admin team.

Retrieved from "https://camphalfbloodroleplay.fandom.com/wiki/Claiming:Camp/Vinnie_Alexander?oldid=1217515"
Community content is available under CC-BY-SA unless otherwise noted.