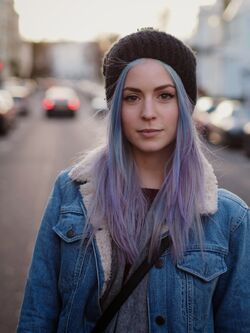 Vittoria is a typical hipster. She hates mainstream music that consists of One Direction, Taylor Swift, Justin Bieber and Miley Cyrus. She's quite easy to talk to, energetic and rarely gets mad. She wears outrageous and brilliant clothing with skinny jeans and band shirts. She believes that there is beauty and kindness in everyone, even the meanest of all people. Now she is very protective like a mother towards the children of Thanatos because it is her duty.

In the year of 1979, the war of Afganistan started. At first, Hades and Thanatos had no trouble with the number of souls coming to the Underworld, that is until the tragic date of September 11, 2001. After that accident, America waged more war on Afganistan. Imagine how horrific the war was, large amounts of people were dying everyday. Thanatos and Hades then had great difficulty and they both went insane. Then Thanatos had a great idea! He created Vittoria, who was like an assistant to help with the souls.

Vittoria helped Thanatos with the souls for about fourteen years, and during these years she made friends with Persephone and was one of her companions during the six months she spends in the Underworld, eventually the number of souls coming to the Underworld gradually died down, Thanatos didn't need Vittoria's help anymore and sent her to help one of his sons go to camp. She succesfully helped his son reach camp, though they encountered a few hellhounds and harpies. Thanatos rewarded her by letting her stay at camp to maybe keep an eye on his children.

Please make sure to add the character to the Mortiad's page to avoid usage of the same event.

This claim has been approved as Mortiad. You now need to make a page for them and a word bubble, if you aren't sure how to do this you can see the guide here. Once you have done that you can add your character's name to the cabin list located on the cabin pages and start role playing with your new character. If you have any questions feel free to ask a member of the Admin team.

Retrieved from "https://camphalfbloodroleplay.fandom.com/wiki/Claiming:Camp/Vittoria?oldid=1295118"
Community content is available under CC-BY-SA unless otherwise noted.