Appearance: (Physically 45, but as he is a satyr, he matures twice as slowly as humans so he's 90 mentally) 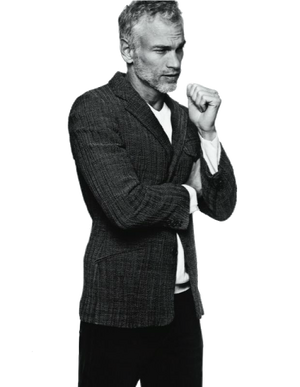 Personality: Vladimir, who is usually referred to as Vlad as he would prefer to, is a protective satyr. Like any guardian, he takes his role as a protector with grave significance. It's in his nature to be serious and forbidding, so he can be annoyed by constant mischief and disobedience. He's like a military general in a sense, but a better term for him would be perfectionist. He keeps everything in a tidy organized order and reacts fiercely if someone were to muddle with that balance. He highly values harmony as a whole, and as such, he strives or at least attempts to keep the peace in check.

But like any defender, Vladimir essentially has a caring side behind that stern expression of his. He's earnestly concerned and attentive, and can get intensely worried if something were to happen to the demigod he's guiding to Camp Half-Blood. Normally, he finds it best not to get attached to one of his "clients" as he labels them, as he believes this will only cause him to regret losing the life of a demigod and possibly haunt him for the rest of his life. And this has happened to him during several occasions, including a recent one, which contributed to a fear of loss.

Upon returning back to camp, Vladimir has shown an pensive mindset and is now routinely engaged deeply in thought. He ponders on what purpose he has now, having felt as if he has failed the demigods he has brought to camp, as currently all but a few are still alive, and one of them is now a Broken Covenant member. He is unsure of his next move.

History: Vladimir was born to a young satyr couple in Koltsovo, Russia back when it was December 11, 1923. By the time Vladimir was physically five years old, they traveled back to New York as his parents Boris and Anastasia were protectors but they couldn't afford to constantly keep an eye on their child. So they left him at Camp Half-Blood, and during this time, he was trained to become protectors like them when the time arose. Unfortunately enough, once Vladimir was physically eleven, they had passed due to a incident involving a rogue demigod. Vladimir was forced to grieve without even seeing the bodies of his deceased parents, as like all satyrs, it was customary for them to turn into plants once they had passed and his parents had become firs back in Russia.

Four years had passed by then and Vladimir was now physically thirteen, although in reality, he was actually twenty six. He was also eligible to officially become a protector, and he set out from Camp Half-Blood and searched for possible demigods to bring hopefully safely to Camp Half-Blood. He traveled all the way to Boston, Massachusetts, and there, he had located a child of Ares, named Mason Scourn. After two months of gaining the trust of said individual, the two managed to travel to Camp Half-Blood, and successfully slayed any monster that dared to venture in their path until finally they reached their destination. His first job was a success, and Vladimir was congratulated as such. But this also made him a cocky.

His next two assignments weren't as convenient. He had located a child of Tyche in Detroit, Michigan named Timothy, and they barely managed to survive. Vladimir had chose a very inimical route, and this led to a hellhound nearly ripping both of their heads off, and it probably would've been successful too had there not been a local child of Dionysus nearby. He beheaded the beast, saving the lives of Vladimir and Timothy. The rest of their travel to Camp Half-Blood was dangerous as well, although not as much in comparison to that one moment.

Perhaps the moment that affected Vladimir the most was his third assignment. It was the first time he had experienced watching the life of a demigod, and one of the Big Three no less, get taken before him. He had managed to sniff out a daughter of Hades, and the two attempted their best to travel from New Jersey and to New york, but they were will quickly attacked by monsters during their journey. New Jersey wasn't that much of a far distance to New York in comparison with another of his travels, but the amount of fiends that attacked them made the demigod and satyr tired and paranoid. Upon finally reaching the gates, Vladimir was on the verge of collapsing from stress and wounds, but the demigod named Imogene sent him waltzing back into the protective borders of camp as she defended against the monsters. But as she was a young demigod, she was killed before other demigods could arrive to dispatch the rest of the beasts.

This incident rather infuriated Hades, who blamed the death of his daughter on the incompetence of Vladimir. The other gods murmured in agreement, but Dionysus claimed that Vladimir was still a newcomer, meaning this shouldn't come off as a surprise. And along with that, he also stated that Imogene had the option of running safely into camp, but due to her recklessness, she perished. Hades grudgingly agreed, and luckily for Vladimir, he was in a moment of serenity when the incident occurred. Had he already been off the edge at the time, he probably would've chose to curse the unfortunate satyr.

Regardless, after that failure in his Career, Vladimir decided to take a little break from protecting. When the death of Imogene had occurred, he was physically fourteen, but his break continued for quite sometime. He had left camp when he was physically eighteen, and when he was physically nineteen, a nineteen year old Mason knocked on his door. By then, Vlad had moved to Boston, Massachusetts, where he first discovered Mason. He was actually quite fond of the place, and had decided to settle there, but he was surprised when Mason arrived. He was always fond of Mason, and the two were close friends. Mason explained he was tired of camp, and when he learned that Vladimir had come here, he followed as well.

While many people weren't too keen on Mason, they enjoyed Vladimir, and he believed he could perhaps make a life here. But that changed when Myth arrived on Mason's doorsteps. Along with Mason, Vladimir watched over Myth with a careful precision, and he was even more concerned when Myth had chose to run through the school when he thirteen. He always had suspicions there was a monster among the staff, but he never warned Mason, as he was unsure. Regardless, he instantly called and informed Mason when Mrs. Clove attacked.

After bringing Myth to camp, he again took a break back in his birth place but upon learning he joined the Broken Covenant, he decided to head back to Camp Half-Blood in search of answers.

I think this is all good

This claim has been approved as a satyr. You now need to make a page for them and a word bubble, if you aren't sure how to do this you can see the guide here. Once you have done that you can add your character's name to the cabin list located on the cabin pages and start role playing with your new character. If you have any questions feel free to ask a member of the Admin team.

Retrieved from "https://camphalfbloodroleplay.fandom.com/wiki/Claiming:Camp/Vladimir_Stalin?oldid=1214710"
Community content is available under CC-BY-SA unless otherwise noted.