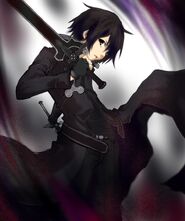 Personality: Wade is a complicated person. Sometimes he tends to be bad with words, while others he can be very direct. He can be rude to people at times but mannerly at others. He loves to tease people and loves seeing there reactions to his words. He is always calm and collective, rarely showing any sign of hopelessness or distress. He's loyal and very kind to everyone and refuses to leave someone behind when they are hurt. He's not very dense with to opposite sex and can determine whether someone has feelings for him or not. He tends to let emotions cloud his judgement at times, tempting him to make rash decisions and working recklessly. Though these may hinder him at times, Wade is someone with incredibly strong resolve and will stop at nothing to accomplish his goal.

History: Liza Moreau was a beloved weather reporter on the 5:00 News. She accurately determined weather that happened as the day went by. She was praised for her accuracy and was favorited by everyone. Her talents, along with her beauty, caught the eye of Aeolus, lord of the winds. After their air time ended, Liza and her co-workers were going to a bar for a few drinks. She didn't like drinking alcohol so she ordered a sprite when she got there. As she and her co-workers talked, she saw Aeolus eying her from a distance. He was wearing a black suit with gray designs on them that looked like clouds. He came over and broke the ice, Liza's co-workers moving to another table so they could socialize. After about an hour of talking, Liza invited him over to her house for "desert".

The next morning, Liza woke up alone in her bed. She face-palmed, figuring Aeolus left as soon as she went to sleep. What she didn't expect was a note on her dresser. She picked it up, unfolded it, and read the message: Dear Liza, Thank you for a wonderful night. I had an amazing time with you and I hope you did too. You may be expecting a little gift soon. -A Friend She had no idea what he meant by present but she found out sooner than expected 3 days later. She had felt a little sick and called into work saying she had to stay home. To be on the safe side, she took a pregnancy test. With a shock, the test came up positive. She was pregnant.

9 months later, on August 14, 1995, she gave birth to her baby boy, Wade Moreau. She loved him so very much. He had her eyes and her hair. She took some time off of work to care of the baby while someone else filled in her place. Wade was a very calm baby. He rarely cried and always made Liza smile. Once Wade turned 4, she decided to go back to work as the meteorologist on the news. She hired a baby sitter to look after Wade and take him to school while she was gone. When turned 8, Liza had retired and settled down in a new home with 8-Year Old Wade to take care of. His first day of Middle School was a bit scary, as he had just turned 13. He found all of his classes with no problem and quickly made a friend. Her name was Tiffany Montez.

Wade and Tiffany were like Harry and Ron. One could not be found without the other. They talked to each other like they were siblings and cared for one another. At a time, Wade had developed a small crush on Tiffany but he quickly put it to the side, as he did not want to jeopardize their friendship. A day before Wade turned 15, he had been attacked by a small hell-hound. He was almost killed when a satyr jumped in and defended him from the monster, getting killed in the process. Before dying, the satyr told Wade that he was a demigod and that his life was about to change drastically. When he went home that day, he didn't tell his mom what happened, since he had a hard time processing it himself.

The next day, which was his birthday, he didn't see Tiffany anywhere at school. He got a little worried and wanted to know if she was okay, but then he had other matters to attend to. A giant scorpion had crashed into the school, making a chilling hissing sound. It's beady red eyes had narrowed on Wade and it quickly scuttled at him, stinger ready to stab. Wade managed to dodge out of the way, making the giant arachnid crash into one of the school buildings. While it was dazed, a van crashed into the school, driven by another satyr. He told Wade to get in and he quickly complied. He backed out as fast as he could as the scorpion got up again. He punched the gas pedal and drove as fast as he could. The giant scorpion roared in defeat, angry at losing his target. Wade looked at the satyr and bombarded him with questions. He told him all of his questions would be answered once he got to Camp Half-Blood.

sorry dude there's only one minotaur

This claim has been approved as a badass son of Aeolus! :D. You now need to make a page for them and a word bubble, if you aren't sure how to do this you can see the guide here. Once you have done that you can add your character's name to the cabin list located on the cabin pages and start role playing with your new character. If you have any questions feel free to ask a member of the Admin team.

Retrieved from "https://camphalfbloodroleplay.fandom.com/wiki/Claiming:Camp/Wade_Moreau?oldid=1581824"
Community content is available under CC-BY-SA unless otherwise noted.