Personality: Yasmina is very polite and kind. She loves helping out others whenever she can (as long as it doesn't get her in trouble). She is also quiet obedient as well when it comes to her superiors. Because she's a daughter of Morpheus, she has the power to interpret things from dreams and sometimes even see the future maybe when she dreams (they may be true or not; these powers started kicking in when she had her first monster attack).

Weapon: CB sword that transforms into a ring 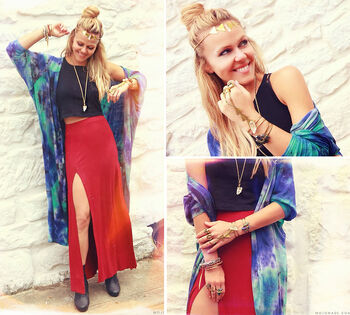 Aamina Amari loved dreaming. Anytime at work, she'd day dream. Anytime at home, she'd day dream. Basically, she will day dream anytime, anyplace. One day, she accidentally got herself very drunk. In the bar she was at, she met a man named Morpheus. They started chatting together and they hit it off. Morpheus saw that she was drunk and thought it was a great opportunity to seduce her to make her sleep with him. He easily succeed and they made love that night. The next day, he vanished and Aamina thought she was day dreaming the whole event of last night. So she continued her normal routines as if nothing happened. 3 weeks has passed and Aamina went to the doctor to get a check up. There she found out she was pregnant with a child. She immediately freaked out because she didn't know who the father was. Then she remembered her "day dream". As she remembered, she got frustrated that a man she did not know, impregnated her with a child. That day, she went back home and a package was at her doorstep. It was addressed to her but there was no sender information. She opened the package and it had a letter and a ring. Thinking that the ring was supposed to be hers, she wore it but stashed the letter somewhere in the attic. She wanted to pretend that never happened so she can raise her baby and not think about how frustrated she was about the situation. Nine months after that whole incident happened, Yasmina Amari was born.

Yasmina Amari was rather very popular in her whole school. She was known for accurate dream interpretations and her kindness plus helpfulness. She had a nice life with her mother and always was obedient to any superior she had. On her spare time, she took karate lessons (only to learn how to defend herself) and learned how to draw (she liked visualizing the dreams/her dreams). At age 12, Aamina gave the ring that was originally supposed to be for Yasmina for her 12th birthday. (She wore the ring whenever she got the chance)

Yasmina's life was full of peace and happiness until she turned 13. That was when her first monster attack happened. A harpy appeared when she was going to school and attacked her out of nowhere. Like any normal demigod on their first monster attack, she freaked out and screamed very loudly. For some reason though, nobody except a teacher (who was a demigod himself) heard her screaming. He ran to where she was and disintegrated the harpy with a sword he had that was originally in a form of a necklace. The teacher introduced himself as Mr. Clark, a son of Hermes. He told her that she is a child of some god that her mother could have had intercourse with. Yasmina believed him right away because the monster attack was proof already that she'd abnormal. Mr. Clark told her that he will personally teach her how to defend herself from the easiest monsters that will come to attack her later on in her life after school.

Yasmina knew that the slums of Saudi Arabia were going to be rough ever since her mother got fired from her job (happened two weeks after she figured out she was a demigod of some sort). So she started being a gypsy and stole loads of things from people any way she could. Since Mr. Clark was a son of Hermes, he taught her loads of tricks and schemes to steal from people. He also taught her pranks as well.

At age 14, Yasmina wanted to know who was her father. She started snooping through her mother's things to find clues on how to identify her godly parent. When she checked the attic, she found the letter her mother stashed in there 14 years ago. Even though she wasn't supposed to read the letter, she read it anyway. The letter was quite lengthy since it was about 3 pages long (it also had directions on how to get to camp half-blood from where they lived). So Yasmina had to take her time reading the letter. In the letter, she learned that her father was Morpheus, god of dreams, how her parents met, and that her ring can turn into a sword of her own. She got angry and upset after she finished reading the letter. She planned on running away when she turned 16. A couple of days after that event, she was walking a park and she had another monster attack. A hellhound attacked her this time and she immediately morphed her ring into her sword. Because she wasn't used to the sword's weight, she had a difficult time swinging the sword around to actually hurt the monster. After 10 slashes, she got the hellhound to disintegrate.

At age 15, she had her third monster attack. It was two harpies this time but Mr. Clark was there to help her so the fight went by faster. Yasmina didn't take that many hits so she got out of the fight without getting damaged.

At age 16, it was time for her to leave. Mr. Clark already was informed of this and since he was really good at manipulating others, he told Aamina that Yasmina was going over seas to study in the US and to also learn more about her history (she's half arab half white). Seeing that her daughter is all grown up now, Aamina let Yasmina go to the States to study abroad. Mr. Clark went with Yasmina and they flew to the States. Using the directions Morpheus put down on the letter, they reached camp with no difficulties. Yasmina said goodbye and thanked Mr. Clark for everything he did for her. He left to go back to Saudi Arabia and Yasmina walked inside to Camp Half-Blood and immediately got claimed by Morpheus.

Just a few minor points, and it will be ready to do. Why didn't the child of Hermes take her to camp earlier when he found out she was a demigod? Before she realized that the ring was a weapon, what did she use to defend herself? Did she get attacked between the age of 12-13? That's just about it, sorry for being late. :)

Mr. Clark didn't take her to camp when he found out she was a demigod because he wanted to train her so she'll be read for bigger fights that will take place in camp. Yasmina would use a sword Mr. Clark lent her to defend herself before she knew the ring was a weapon. And she did get attacked at age 13, not at age 12. Hope that clears it up. :)

Retrieved from "https://camphalfbloodroleplay.fandom.com/wiki/Claiming:Camp/Yasmina_Amari?oldid=1360047"
Community content is available under CC-BY-SA unless otherwise noted.