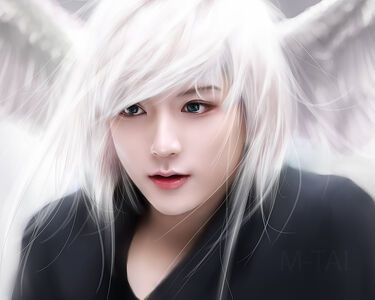 Personality: He has a standoffish personality, but is just the sweetest thing if you get to know him.

History: Yuki's father, Yukio met Khione during a snow storm in Hokkaido Japan. He was hurrying to get home to his wife when he saw her standing on the side of the road, covered in snow. He quickly pulled over to assist her, but as soon as she got in the car the engine stalled completely. He reealized that he recognized the woman from a cafe near his job, that he had recently met just a few days before and often talked to. Her alleged name was Mayumi, and he found her stunning.

Because the engine stopped, there was no heat in the car and to keep warm they had to huddle together. Yukio tried to use his phone to call for help, but there as no service. He and "Mayumi"  tried waiting for the storm to pass by conversating but one thing led to another and they found a more "active" way to keep warm. By the time they were done the storm had died down and the car was up and running. Yukio discovered that mayumi was a tourist, when he dropped her off at her hotel and she said that that was her last day in Japan.

A few months past and Yukio sees Mayumi once again at the cafe where they first met. SHe gave him a basket which held a beautiful baby boy and explained to Yukio that she was really the Greek goddess Khione a Greek goddess and what yuki was. When Yukio brought home yuki to his two older sons (Osamu 10 and Ryuu 7) and wife (Izumi) they were all angry, but accepted him. Well at least pretended to.

While his two older brother loved and cared for him, their mother hated him. She was cold and cruel to Yuki and hated that her sons would defend him. He  grew up with lots of friends, but did terrible in school because of ADHD and dyslexia. This caused extra trouble at home and made it Izumi hate him even more. When Yuki made thirteen he made a best friend named Aki (who was a satyr). He and Aki always spent time together. Aki was accepted by the family, excluding Izumi. Yuki didn't go through his first monster attack until he was fourteen and Aki helped him get away.  He was attacked by a baby hellhound, but luckily their school was close by so they retreated there.

Aki tried to convince Yukio to buy them tickets to CHB right away,but Izumi got in the way. When she asked why Yukio bought two tickets to America and Yukio told her that Yuki was going to study abroad she grew angry. She wanted her sons to do so as well, but Yukio didn't have the money. SO in the end no one ended up leaving. There was no other monster attack until he was 15.  He had gotten home, but Izumi wouldn't let him in. So, he was just going to go over to a neighborhood friend's house until his father got home. But, on his way there he was attacked by a minotaur attacked him. Having no where to run and no one to help him he was killed.

His mother Khione took pity on him and made him a snow spirit. He stayed in olympus with her for a few years. Helping to serve the gods until she permitted him to leave to CHB.

This claim has been approved as snow spirit. You now need to make a page for them and a word bubble, if you aren't sure how to do this you can see the guide here. Once you have done that you can add your character's name to the cabin list located on the cabin pages and start role playing with your new character. If you have any questions feel free to ask a member of the Admin team.

Retrieved from "https://camphalfbloodroleplay.fandom.com/wiki/Claiming:Camp/Yuki_Ito?oldid=1461751"
Community content is available under CC-BY-SA unless otherwise noted.