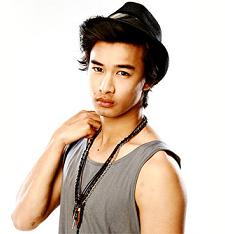 Personality: Zeal is outgoing, though he is quiet at times. He observes his surroundings, and cares for people who are close. He is a bit straight-forward, and that's what really get's him in trouble. Everything he does, he tries to make it fun for himself and others. He isn't really open with his feelings.

How they met: Jae Park had been working as a Veterinarian for 3 years. He felt that he was just reaching the height of his career, and nothing could ruin it. One day, Jae went out with some friends to celebrate a successful year of business. Jae got a little bit tipsy, and wouldn't be able to drive himself home. A woman dressed in a short black mini-dress was across the room eyeing Jae . Jae's friends all were drooling over her, and encouraged Jae to go and talk to her. Without resistance, Jae agreed and made his way over to her. They introduced themselves to each other. She said her name was April. Jae, mesmerized by her beauty, talked to her throughout  the whole night. Just when they finished up their conversation, Knowing he wouldn't be able to drive home, Jae's friends left him. They had ditched him, an act of treachery, only caused by the one and only, Apate, the one who called herself 'April'. She had used her powers of deceit to make Jae's friends leave him. Seeing he had no ride, Apate offered him a ride home. Jae agreed. When they arrived, Jae invited her in for some 'coffee'. Instead of coffee being made, upstairs in the bedroom, a baby boy was being made. The next morning, Apate was gone, and so was 50 dollars from Jae's pocket. After Jae's and Apate's first ordeal, Jae hadn't seen or heard from her again. But to much of his dismay, 9 months later, a note and a baby was left in his living room unexpectantly. The note read:

Remember me?...April? Well I don't know how to put this, but this is your child.  I'm sorry you had to find out like this...really, it's just that I'm just too busy to care for such a beautiful baby boy. Now, all I ask is you do whatever you think is best for him. Again I'm sorry. But please, find or give him the care he needs. Tata.

Jae was totally awe struck. He couldn't believe that 'April' had left a baby in his house. And not knowing how she got in struck him even more. Jae wasn't ready to become a father, not yet anyway, so he did what he thought his only option was. To give the baby boy up for adoption. After a few months of searching for the right adoption home, the baby slowly grew on Jae, and Jae was a bit reluctant to give the baby away once a home was found. The baby was adopted by the Dru family, whom soon after the adoption process was finalized, named the baby Zeal Dru.

Childhood/etc.: Unknowing, Zeal grew up a few towns away from his father. The time he spent with his adoptive parents was exceptional. The Dru family cared for Zeal as their own. Zeal was never abused, just always cared for and loved, never did he think that he was adopted or even cared. He was put into only the best schools. Everything given to Zeal was to be second-to-none. Zeal was a playful child, and also very mischievous. He was like that even as he got older.

Once Zeal turned the age of 7, he would see and hear unfimiliar things. Things you'd never think to see or hear. Dark faces in the windows, shadows disappearing, and footsteps behind him only to find there was no one there. Zeal tried to tell his adoptive parents about what he was seeing. They'd only tell him that he was having nightmares and that he'd be fine.

At the age of 12, Zeal had just left baseball practice, and was going to the pizza shop down the street with friends. All in a group, Zeal broke away from it because he thought he saw something strange down the street. He told his friends he'd catch up soon, and not to worry. Zeal made his way down the other street. He couldn't find what it was, and decided his eyes were playing tricks.Heading back with the group, Zeal was confronted by a pit scorpion that was about 10 feet away. Zeal was terrified at what he was seeing right in front of him. He began to run as fast as he could, not knowing where to go. After running for what felt like an hour, Zeal hid inside the boys restroom at the park he practiced at. He waited for a while, knowing his friends probably had forgotten about him by now having fun, while he was being chased by a scorpion. After 30 minutes Zeal left the bathroom, hoping the scorpion was gone, but was wrong when the scorpion tried to jab him with its tail. Zeal dodged it by a landslide and started running again. Looking back, he saw the scorpion dispelled into dust. Confused he walk over to where it once was. Zeal couldn't explain what happened, and returned home.

When Zeal returned  home, he found one of the older baseball players, about 3 years older sitting on his porch. Zeal never talked to the older baseball players, so he had no idea why this particular one was on his porch. The older baseball player told him his name was Evan McCleary, big half- brother of Zeal's friend, James McCleary. Evan told Zeal that when he went to go pick up his little brother from the pizza parlor, James told him that Zeal had been missing for quite some time. He explained that Zeal had just parted from the group saying he'd be fine. For goodness sake, Evan went to go look for him. He found him when he decided to look in the park, that's when he saw the pit scorpion and shot it with an arrow he conjured from shadows, for he was a Demi-god, like Zeal, but a  child of Nyx.

Zeal, despite what he saw, thought Evan was crazy. He ignored him and walked into his home, only to find his parents dead on the couch, with large welts on their backs, and yellow oozing pus occurring from the wounds. Zeal was devastated and scarred for life. Evan walked in and asked Zeal to come with him. He explained that he was going to run away with a group of demi-gods who felt that they had nowhere to go, but to survive. And that they would train, to hunt, and kill any monsters that came across them. Zeal agreed and packed his stuff for the adventure. As cold as it seemed, Evan insisted they leave the bodies, since they had no way to explain the incident, for someone else to discover.

For 6 years, Zeal and the other Demi-gods hunted down the beasts. Over the course of the 6 years, Zeal had found out that there was a camp for demi-gods by his fellow group, and that his father lived in Rhode Island, a few towns from where his adoptive parents lived. Zeal had later figured that he was adopted since his adoptive parents were black, so he decided to find his adoption records, leading to the discovery of his birth father. He discovered that his father died by 'unknown causes'. he dug deeper and also found out that his father, Jae, had a daughter named Yun Park 2 years after his birth. Zeal had mixed emotions about the discoveries. But what was more important to him, was that he had a sister... the same blood. He searched her up, and found she was sent into foster care. He hoped to find her and welcome her into the group he was apart of, but was later saddened when he found she had ran away.

Not giving up, he had discussed to his group that he would be going off on his own to find his sister, so he'd be able to protect her like a big brother should. Evan protested, saying it was to dangerous for him to go alone. Zeal disagreed replying that his sister could be in more danger. Evan gave in, but decided to go along with Zeal in the search for his sister. For a year they looked for her, fighting a few monsters along the way. To no avail they never found her. Zeal was about to give up and go with the possibility that she might be dead in a dumpster somewhere, or eaten by a monster if she was a Demi-god too. Evan couldn't stand Zeal so down and depressed, so he offered one last idea to go to Camp Half-Blood in hope to find her there.

Evan and Zeal traveled to Camp Half- Blood together, with at least one monster attack. When they reached the main-gate, Evan told him he wouldn't be staying at the Camp, and that he would continue his days as a monster hunter. Zeal understood, and they said their last farewells before Zeal entered Camp and was claimed by the goddess Apate.

He fortunately found his sister at Camp Half-Blood. But he is hesitant to confront her. Till' now Yun doesn't know she has a brother.

Did they ever give Zeal's adopted parents a proper burial or did they simply pack and leave without informing anyone else of the Drus' deaths? How did he find out about camp, his father and his sister? Correct me if I'm wrong but Zeal would be 18 by the time he reached camp, yes? If Evan's a demigod, does that mean his brother, James, is a demigod too? Two demigods would attract more than 1 monster. Where did he get his weapons?

I fixed it. And yes Zeal would be 18. And James isn't a demigod. Evans father hooked up with Nyx, in result of Evan. She of course, disappeared, and Evan's father later got married to another lady, in result of James. If you're talking about Evan's weapons, after some practicing, Evan could conjure a weapon out of shadows since he is a Child of Nyx, and that is one of their powers.

This claim has been approved as a son of Apate. You now need to make a page for them and a word bubble, if you aren't sure how to do this you can see the guide here. Once you have done that you can add your character's name to the cabin list located on the cabin pages and start role playing with your new character. If you have any questions feel free to ask a member of the Admin team.

Retrieved from "https://camphalfbloodroleplay.fandom.com/wiki/Claiming:Camp/Zeal_Dru?oldid=1240190"
Community content is available under CC-BY-SA unless otherwise noted.