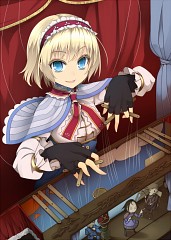 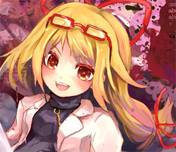 Personality: Soft spoken, she isn't very vocal, and often uses body language more than actual words. She isn't shy, and doesn't mind people, but she just doesn't seem to talk much. She has apparent likes and dislikes based off of her reactions to things via body language.

Bio-parent meets Hephaestus: Carry is a poor woman. She live mostly off of small sculptors she makes from random garbage materials and junk she can find. She scratches by with enough money from other odd jobs plus this hobby to pay for a small 1 room apartment. One day she ran into a man while walking home from the junk yard. She ended up tripping, and cutting her knee on sharp metal she was carrying. The man (Hephaestus)insisted on driving her to the ER, but since she didn't have the money, told him to just take her home. Later at her house they figured it wasn't that serious, as it just looked worse than it was. After talking, and Hephaestus liking what he saw, they spent the night together. After the one night stand, Carry felt a bit better, but soon she realized she made a big mistake. She was pregnant with a child, when she couldn't even afford to live alone.

Zella was born, and almost immediately put up for adoption. When she grew up to about 4 a nice couple had adopted her into their family. The new parents were Jessica, and Kris. Kris built puppets for a living, and together Jessica and Kris made a nice living off of selling the puppets in a store. Kris would make little puppets for Zella to play with. Zella often took the puppets apart, and fiddled with each little part. One day Kris noticed that one of her puppets that was in pieces one day, was neatly put together the next. Things went on pretty smoothly, when Zella turned 8, and met her new sister, Lilith.

From her first words "My name is Lilith!" Zella already felt like a bond grew. After Lilith had settled in, they often played together, Zella enjoyed listening to Lilith chatter, and she even tried making Lilith a puppet, although she wanted it to be perfect she worked hard on it till it was. Once she completed it she went over to Lilith's room, it was dark outside, Zella had stayed up late to finish it. Once in Lilith's room, she heard the door to the shop downstairs open. Zella new her parents were awake, but no costumers came in at this time. Zella quickly awoke Lilith, and together they went to the stairs to peek. Kris walked over to greet the strange person. When Lilith and Zella reached the stairs, and peeked between the railings, the monter's head jerked in their direction. The man was suddenly staring them down. One of the girls squeaked but Zella was too scared to know who. Suddenly the man started rushing to the stairs. Kris by now had gotten the idea that this was some kidnapper or burglar, and he tackled the strange man. Zella and Lilith ran away into their room, and from down the stairs they heard a wierd, but pretty instrument playing (reed pipes). Soon after a bit of scuffling Kris, and a different man than before came upstairs to their room. The man looked at us, and then back to Kris, giving a small nod. Kris then told the girls to gather their things, and that we would be going on a trip. The trip turned out to just be them moving in with the man, whose name they later learned was Jeremy. Jessica explained he was a relative, who wanted to help us.

Zella and Lilith, Kris and Jessica, and Jeremy, all grew up nicely together, Kris and Jessica still ran their store, and made puppets for Zella and Lilith, and Jeremy went out and about during some days. Until one day, another mysterious thing happened again. There was a knock on the door. It was just Zella, Lilith, Jessica, and Jeremy at home, Kris was at the store closing up. Jessica went to answer the door, thinking Kris had forgot his key. When she unlocked it, the door burst open, knocking Jessica down, and a woman ran in. Jeremy immediately jumped up, and grabbed a braclet from off his arm. He always wore it. The bracelet turned into a long CB sword. The woman seemed to change at the same time the sword did, turning from a fairly pretty middle aged woman, to an old hag looking, woman with a bronze, leg. Jeremy confronted the empousai. Were those hooves on Jeremy? Zella began to get more and more confused. The empousai clawed at Jeremy, who brought the sword up in time for the empousai's hand to get sliced off by the blade. It screached and pulled back it's stumped arm. Jeremy took the moment of pain and continued to cut away at the empousai's chest, and limbs. Eventually the cuts gave way to a golden powder as the empousai dissolved away. stunned Zella looked over to Lilith, who was probably just as shocked as she was. Jeremy looked over to the both of them, just as Kris walked in the door, seeing Jessica still sitting on her butt, and his two girls petrified with a half-goat Jeremy standing there sword drawn. Explanations later, Zella and Lilith now know about being demigods, and about Jeremy, and Camp. Jeremy told them that he would train them, before sending them to the camp.

Training and Heading to Camp:

Jeremy gave Zella and Lilith their first weapons. They got to pick their own, and he would train them the best he could how to use it. Zella's eye was caught by a small, ring. Zella liked the look of it. She picked it up and slipped it onto her finger, and the ring started to stretch over the rest of her knuckles. Eventually three long sharp blades extended from it, appearing as a CB Pentra claw. Jeremy handed her the matching ring, which she put on as well. Now she had a matching pair of Pentra Claws. She liked the rings even better now, feeling more safe now that she could defend herself. Turning to see what Lilith picked, she was wearing a necklace. Curious she watched the necklace turn into a long three-spiked whip. Zella smiled happily at Lilith, and they began their two years of training. Zella now knew that her father was most likely Hepheastus, and that she had special powers because of it. Jeremy didn't know how to use these powers, but Zella still practiced them in secret. Zella eventually learned the Pentra claws in and out, she could slice anything thrown at her up in seconds, watching her sister practice the whip inspired her to try everything she did, and try to do it just as good, cutting three more gouges out of the same log her sister just had. Zella often stayed quiet and listened to her instructions, often responding with simple looks, she loved Jeremy like an Uncle because he seemed to understand her at all times. One day, when Lilith and Zella were 15, Jeremy walked in bleeding, and exaughsted. He was being followed by two empousai. She heard Lilith yell to take care of the left one, and immediately the pentra claws grew out from her knuckles like a little girls version of Wolverien. The empousai swung it's claws toward Zella, who batted them away with her own set of claws. Talk about a cat fight... Zella managed to clip off some fingures of the empouasai's hand, then shreded the left half of it's chest, before it began pushing her back. At one point the empousai smacked her back, sending her sliding into a couch. The empousai paused to catch it's breath, and laugh at Zella, who was now bleeding, and motionless. Suddenly a large wooden automated puppet smashed into the empousai, which landed in front of Lilith's last fireball. The puppet returned to the closet it bolted out of, and crumpled to the floor. Zella then stood up, dizzy, and clung onto Lilith. Together they went to get Jeremy, and after he recovered, brought them to camp. 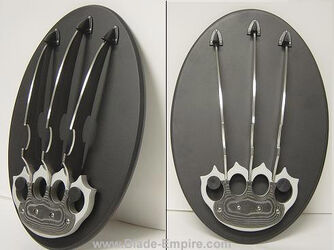 Battle Puppet, made from CB after joining camp: 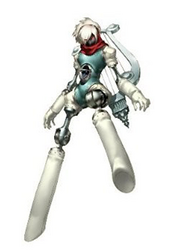 This claim has been approved as a Child of Hephaestus. You now need to make a page for them and a word bubble, if you aren't sure how to do this you can see the guide here. Once you have done that you can add your character's name to the cabin list located on the cabin pages and start role playing with your new character. If you have any questions feel free to ask a member of the Admin team.

Retrieved from "https://camphalfbloodroleplay.fandom.com/wiki/Claiming:Camp/Zella_Merina?oldid=1351722"
Community content is available under CC-BY-SA unless otherwise noted.