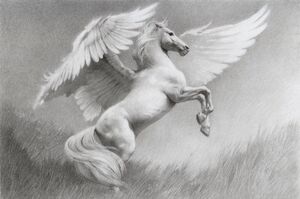 Why does Zane have Firebright: Firebright was a gift from Eos to Zane when he was to depart from her after a long time of service under her. Since Eos knew his journey would be lonely and that he'd need a friend, she gave him one of her horses, Firebright, who was also one of the horses Zane tended to care in Eos' stables.

Special abilities:' Nothing much, but he is an immortal pegasus, since he was then used as a substitute for either Lampus or Phaeton, Eos' immortal chariot horses. Being a pegasus of Dawn, he can glow or give off light that has the colours of dawn, though he rarely uses it. Firebright has a higher endurance and stealth than most pegasi, though he likes resting better. And he likes cursing a lot. With the gift of telepahtic link with his master, he does it all the time.

Where does he stay: As Zane resides within the Sanctuary, Firebright chose to reside at the Mountain Pond. Zane wanted to know where exactly, yet Firebright disagreed and just told him to back off his territory. After all, he'd only be there and will answer whenever Zane calls.

Retrieved from "https://camphalfbloodroleplay.fandom.com/wiki/Claiming:Pets/Firebright?oldid=1682855"
Community content is available under CC-BY-SA unless otherwise noted.