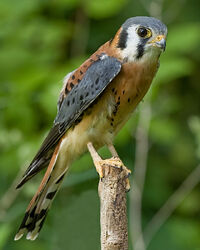 The American Kestrel named Huckleberry is owned by Caleb Summers, son of Hermes.

Hermes gifted it to Caleb, although he doesn't know it yet. Hermes set it free in a forest in which Caleb would eventually walk through to get to camp. He instructed the Kestrel to wait until Caleb got there and then follow him and befriend/protect him.

Huckleberry also has an empathy link with Caleb.

wait wait wait the bird can transform into any bird???explain please?

Yes. I wanted to know if that's OP or not. The thing is that the maximum  wingspan of the bird Huckleberry transforms into, cannot be lasrger than a meter and a half.

Please can you explain how the kestrel is able to shape-shift into any bird it so desires, as this (rather obviously) isn't an ability that birds don't logically have. It also has to be smaller than a bear, or a dragon, which I assume should fall under the wingspan.

Sorry Xax. It's been decided that you can't have a bird which transforms into another bird. However it is still okay to have Huckleberry as a Kestrel and have the empathy link- as long as the reasoning for it is there.

Okok. I believe I explained the reason before- Hermes gave it to Caleb to protect him (well now it shall be keep him company). But oh well. I guess it's fine. Fixed

Retrieved from "https://camphalfbloodroleplay.fandom.com/wiki/Claiming:Pets/Huckleberry?oldid=1545357"
Community content is available under CC-BY-SA unless otherwise noted.