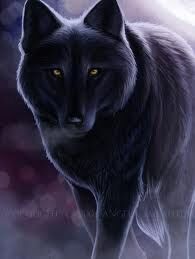 4.On the way to camp Mia and her satyr got seperatted after an attack. While searching for the satyr Mia found a cave like rock and she went into it. That's where she found a small wolf. The wolf studied her and she studied the wolf. Then it dashed out of the cave. Mia chose to stay there for the night. When she woke up the satyr was there with the small wolf. They chose to stay and rest some more and the satyr told Mia about the black wolf how it led him to Mia. That's when Mia saw two dark necklaces around the neck of the wolf. She reached over and removed them and found a note to one of them. It was from her father. It said that the wolf was a gift from him and he had given the wolf an empathic link with her when she was younger. He also said that the wolf had always beenthere to protect her. After the fight they coutinued to camp.

There is no such thing as thought necklace, they can have empathic link, but even then it has to be explained how they got it. User:Travelg

A puny wolf taking down a hellhound. that's not possible Orbie

Again, sorry, it's just not realistic enough. A demigod, satyr, and wolf are not enough to take down 2 hellhounds. Orbie

Hmmmm, sorry I still think it's a little iffy. How about that hellhound wasn't defeated, it just ran away after it got wounded? I hold with those who favor fire. Gettin' hot in here! 20:05, February 19, 2012 (UTC)

I know you have worked really hard on this claim, but it just doesn't make sense. I'm really sorry, but you need at least two demigods to drive away a hellhound. One demigod, a satyr, and a wolf are not enough. Sorry. Orbie

Retrieved from "https://camphalfbloodroleplay.fandom.com/wiki/Claiming:Pets/Mia%27s_Wolf?oldid=1438268"
Community content is available under CC-BY-SA unless otherwise noted.