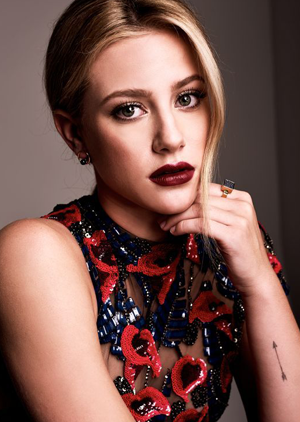 Colette is a very proud young woman who knows fully well what she's capable of and wont settle for anything less. A perfectionist at best, she strives for excellence in everything she does and if she happens to fall short then that simply just wont do. Being spoiled her entire life is really what it boils down to, she was told her entire life growing up that she could do anything and get anything as long as she put her mind to it, and since her youth that's exactly what she's been doing with no signs of stopping.

She is a very genuine and caring person, although her perfectionist attitude can kind of make it seem like she doesn't care about others, she really does and tries her best to understand and help everyone she can. Curious is a great way to describe her as she always wants to know everything going on and always has to try and help everyone with their issues.

Colette doesn't like to live life under the radar. Growing up with luxurious things and a luxurious lifestyle really crafted who she is today, someone who loves the spotlight and craves all eyes on her. Whether that means stealing it from other people or just coming into it naturally, Colette will find a way to get it. It's not her fault, blame her parents for doting on her. One day maybe she'll learn that the real world doesn't work like that, but for know she likes how it works now.

Many years ago a prophecy was delivered to the gods of Mount Olympus, hinting at a time where their power would be threatened and legacies would be the smartest way to potentially preserve one's lineage. The prophecy was hinted at being unlikely, though serious in nature. Subsequently, some gods took it seriously and procreated with mortals to have an abundance of demigods whilst others, perhaps the larger amount of gods, paid little mind to it and went about their days as usual - having demigods with mortals they were infatuated with, and not putting a quota on their legacy. Hera, initially, was among the latter group of gods. She didn't see a need to preserve her legacy and, at that, preserve it with demigods. So, for a few years, she went on being jealous of all the other gods as she felt like she couldn't have children like that due to her scope. Something happened over the course or a year or so, because soon she found herself looking out for a mortal to mate with. She was picky, incredibly so, and it was hard for her to find interest in mortals, until of course an up and coming French-Canadian actor by the name of Alexandré Bellerose caught her attention.

Alexandré was a Montreal native, never leaving his luxurious home until he kickstarted his career as an actor. Never forgetting his roots however, Alexandré kept his home in Montreal while also living in LA. It was there that he caught the attention of Hera. As Hera was incredibly picky and wanted to make sure Alexandré would be a good father for one of her limited legacies, she watched him for a week until approaching him back in his home town of Montreal. Posing as a tourist, Hera tried her best to catch the man's attention, with it obviously starting off rocky as she was new to the whole mating with mortals idea. Alexandré was such a nice man that he willingly gave Hera the tour around Montreal himself, which was what started their night off. Hera wouldn't dare say she felt infatuation for the man, but that wasn't the case for young Alexandré who was greatly saddened when the two parted ways the next morning.

Within a few weeks, Hera ended up giving birth to a baby girl. Knowing that it was one of her legacy demigod children, Hera descended down to the mortal world to present the baby to Alexandré. Alexandré was delighted to see Hera again, but was naturally confused about how she had already gone through a pregnancy. Hera had so much pride in her own self success as the queen of Olympus, but she couldn't dare tell Alexandré that. With a half-hearted excuse, Hera left the baby in Alexandré's care and went back to Mount Olympus.

Alexandré had always wanted a family, not necessarily in this way but he would care for his daughter who he decided to name Colette no matter what. He didn't give up on acting, but he did find a career that could earn money in between movies. Working as a real estate agent in Montreal Alexandré eventually met his wife. Adèle Beaumont was a beautiful woman, and she treated Colette as if she was her own daughter. The family couldn't have been happier in the early stages of their life, and Hera was watching from Olympus, proud that she didn't screw up. Little Colette was only two when Alexandré and Adèle got married, her little feet carrying her as fast as they could do decorate the hall with rose petals as the flower girl. Colette grew up happy, and it appeared as though nothing was ever going to change that.

Alexandré and Adèle never had a child of their own together as Adèle was unable to have children, but the presence of Colette was enough for the two. She was doted on and spoiled, with such a wealthy couple as her parents Colette could ask for anything and she would have gotten it. As Alexandré was still in the acting business, they thought best that Colette attend a private elementary school. She loved the prestige and orderly routine of the school, she was definitely in her element in regards to the level of class and sophistication of the school. The family often went back and forth between Montreal and LA, and the odd trip abroad snuck itself into their plans every once in awhile.

The family was in Puerto Rico for one of Alexandré's movie premiers when Colette experienced her first monster attack. She was only nine years old when the attack happened, she was alone on the beach while Adèle had went to grab them some drinks from the restaurant. Her step-mother had only been gone for mere seconds when a harpy had dive-bombed Colette on the beach. Screams were heard by all, but to the mortals on the beach it simply looked like birds were pecking at Colette's hair. A demigod who was also vacationing had heard the screams and came to save Colette. Before the demigod had even finished fending the harpies off Adèle had came back and got Colette out of the situation before the demigod could mention anything about camp.

Similar situations kept occurring as Colette continued getting older, more frequently even. Between harpies getting slain by demigods and hellhounds getting taken down by satyrs, Colette was lucky enough to avoid them all while simultaneously never actually having to deal with the aftermath of her saviours trying to talk her into coming to camp. Around Colette's thirteenth birthday Hera had sent a nymph down to Montreal to give two rapier swords to Alexandré so Colette could learn how to defend herself. They were gifted to her on her birthday, and she began taking swordplay lessons in their mansion. Within a year Colette had managed to adapt to the skill rather quickly, and within that year she had discovered the two swords transformed into dangly earrings. Seeing it as some sort of a sign that she should have them on her at all times, Colette always wore them. Now whenever a monster attack occurred, Colette just unclipped her earrings and slashed the monsters to pieces, not needing the help of any demigod or satyr around her. Those that were looking on had just thought Colette was an experienced camper, thus leaving her to fend for herself as she appeared to be capable on her own.

Colette lived like this until she had turned twenty, living a lavish lifestyle while secretly taking on monster attacks from every direction. Never once struggling to fend the monsters of, Colette was incredibly proud of herself. One night Colette had ran into a messenger nymph sent from Hera. The nymph explained as much as she could to Colette, also informing that there was one other child of Hera somewhere in America, the same age as her, and that she needed to meet him in Missouri. Colette was skeptical of course, but something told her the nymph wasn't lying and within a week the Bellerose family found themselves in Missouri. Colette parted ways with Alexandré and Adèle when she met her half-brother Fabian Lyons. Together the pair made their way to Camp Half-Blood where there was a counsellor vote to see if they would be accepted into camp after being claimed as Hera's children. The first of her kids to ever be claimed, the pair were accepted into camp and made counsellor and lieutenant of her cabin in honour.

Powers of a Child of Hera:

Retrieved from "https://camphalfbloodroleplay.fandom.com/wiki/Colette_Bellerose?oldid=1761491"
Community content is available under CC-BY-SA unless otherwise noted.