Satyr of the Ages


(This Character Belongs to Nhlott)

Colin grew up with his satyr parents Carver and Lilly Moss in New York city, as they were in disguise as mortals, and tried to live normal lives. Colin had always been fascinated by mortals and their ways, having been raised around the mythological world, and would always be reading about pop culture and mortals' version of history. His parents brought him to camp for the first time when he was 14 (effectively 7), and he immediately fell in love with it. He would then visit every couple of weeks with his father, as he had brought some of the older campers there, and would often come to see how they were doing. Soon, Colin would begin sitting in on different lessons, and would train with other campers. He excelled in many areas, such as Archery and knife fighting. One day while leaving camp, Colin began to smell a demigod, and a monster not far behind them.

A few seconds later, he saw a young girl running towards camp, a manticore on her tail. He noticed that the girl was slowing down, and the manticore was about to get her. Without thinking, Colin sprinted behind the girl and did a baseball slide to trip the manticore, just as an Obsidian sword sprang up through the ground, dissolving it into dust, and flying into the girl's hand. Colin made sure that the girl made it into camp safely, and then she was claimed as a daughter of Hades. Colin and the girl, Eliza, became fast friends, and they became close. Soon, Eliza felt as though she were suffocating in the Hades Cabin, and that she felt like there was something better she could do with her powers. He advised that she try to become a hunter of Artemis. She did and fit in much better there. The two continued to train together for several years.

Eliza eventually became lt. of the hunters, and Artemis asked her how she camp to be at camp. She told her that she wouldn't have made it without Colin, Artemis gave him a bow as a gift for bringing her one of her best hunters. Once he told his father what happened, Carver contacted a friend he had on the council of cloven elders and saw to it that Colin become a protector. Since then, Colin has become a great and highly successful natural protector, having brought in dozens of campers, most Recently Victor Halen, Joss Oliver, Zeke Marshall, and Alec Page.

Colin is prone to being cocky and arrogant due to his skills as a protector. He is a fun-loving free spirit. His boundless confidence has caused him to be uninhibited, which has caused him to reach the full extent of his potential. He is the self-proclaimed best protector since Grover Underwood.

Silver bow given to him by Artemis

Celestial Bronze Hunting knives given to him by Victor Halen 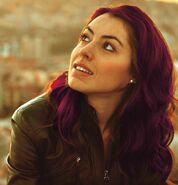 My Girlfriend,Topaz
Add a photo to this gallery

Retrieved from "https://camphalfbloodroleplay.fandom.com/wiki/Colin_Moss?oldid=1335720"
Community content is available under CC-BY-SA unless otherwise noted.