Personality: She is a very peaceful person to be around. She likes flowers, and loves listening to quiet parts of the earth. She is very hard to impress. She could be farily funny, but only when she is around someone she likes. She is meh with the idea of sex, and thinks all girls should care first about family + friends then their love life. She loves running. She looks up to Artemis even though she is not a hunter. She takes a lot of yoga. She is very loyal to her friends.

Weapons: Ring that turns into a sword 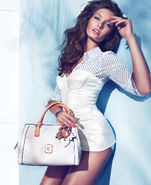 William Madden was a editor for, "Manly Vogue" Magazine. He was very handsome. He was also a demigod, child of, Boreas actually. He lived in a one room apartment. He didn't really have a good life, as he was pretty poor, but was always thankful for what he had. He had to eat beans from a can and cooked them from hot tap water he cooked up with a badly-working stove. He should hate life, but yet he was a peaceful person. He always looked at the GOOD side of things. He was never interested in offers from woman to go out. He didn't have many friends because he was so poor and too stressed out to go out with his co-workers. Some say he was too much of a loser, others say he was just too up with drugs. But, that wasn't true.

One day, he was finishing writing an article about a manly tanning spray, (which was actually giving acne and hurting people.) when he got up and met Mary (Hebe), the new girl doing the love column, for men who are a bit "bad in le romance". They talked for a while and after a few weeks, they did it. It was unlike William to do it, but he was in love. Soon, they were happy in love. Mary then disappeared, after 1 month. He went along with his life, sad and lonely. He missed her so much and even reported her missing.

But then outside his 1 room apartment was a baby and a note. He was confused. When did he have a child? She was crying and had red rosy cheeks. She was in a basket and has a light pink blanket covering her. When he took her out of the basket and saw in it a baby bottle, different types of milk, and a note. The note said:

I have duties on Mt.Olympus. I know it's hard to understand, but I am the goddess, Hebe. Most known as Mary to you. Soon, Hazel (I named her.) will have to go to camp. A camp for people who are demigods.Read Greek mythology to understand what is a demigod. You might meet a satyr on the way. Take care of her please. Enclosed is a ring but, it's also a sword once you click the button on it, it's on the right side. Please don't let her use it until she's on the journey to camp/she's 16.

After reading, William was happy that at least Mary/Hebe was still alive and not killed by someone. He was also happy for his own little baby girl. He felt bad also since she would be have a life that was dreadful and never have a lot of money. He decided that he wanted to name her Gretchen, as that was his dead sister who got killed by harpies was named. He wanted a little bit of Mary/Hebe in her life though, so he made her middle name Hazel, as a memory of Mary/Hebe.

Gretchen lived a pretty good life despite not having a ton of money. She went to a public school and wore a lot of the basic clothing she found. She went to a lot of flee markets for clothing. She had a lot of friends but she was not popular. She got small mini jobs and babysat children for at least $16.00. Everyone thought she was sweet and LOVED her. She was grateful for everything she had.

One day, when she was 13 years old, a photographer came up to her and asked if she could be a model for Gap kids. She offered her $500 a hour. William agreed and signed the contract for her since she was not yet 18. She was so excited. Modeling was one of her dreams, besides going on a reality television show. When they got to the shoot area, there were snacks and various types of clothing which the stylists help pick out for her. At first the photographer was clapping and taking wonderful pictures. The next thing you know it's a empousa. She screamed and cried. It was trying to attack her and William! She tried running away but it was no use since it was gaining on her. William then got on top of it, wrestled it with all his might, and then stabbed a sword (which was a blue watch that didn't even work) into its heart. It grumbled as it burst into golden sparkles. Gretchen was so horrified, she had to be carried home. After she could finally speak she asked questions like what was going on, what the heck was that, and dad, why was she a monster. He answered them all with, "you must have had a real bad and sad dream. I don't know what your talking about." She shrugged it off giving up asking him knowing he would tell her the same thing.

At 14, she was out walking with her dad, going to see if they had anything good that was around $20 at Walmart. She then saw a hellhound. Her dad then went over and clicked something on the watch. It was a sword again and he jumped back, staying far away from it. As the hellhound got closer he pointed his sword at it. He then took a risk by jumping on top of it and sticking the sword everywhere he could while being on top of the hellhound. It then died slowly, it grumbling and annoyed. She was pretty freaked out again, but didn't say anything. They just walked away from Walmart and went to go eat disgusting pasta with no sauce. When she went to sleep, she dreamed and thought of what type of explanation would explain these monsters.

At age 15, they were walking down Jones beach after William finally got a run down car. They thought they saw a seagull, but they actually saw a flock of Stymphalian Birds. One of them flew to Gretchen and it was close to pecking her skin out, until she screamed and William started banging on a nearby drummer's drums that was left behind. They all started flying fast and tried to escape. She then yelled. This was seriously becoming traumatizing. She asked him what was going on and all he answered was with, "You will soon find out when you are 16." She begged and begged and bothered him, but he was not giving up with his rule.

When she turned 16, she had the party of her life. She was not rich, but she was allowed to let her 2 best friends, Kelly and Shannon hang out in her bedroom, which was super small. They were listening to music on Kelly's radio and painting each other's nails. When Kelly and Shannon went into the bathroom to freshen up, she asked her dad again. A promise was a promise. He spilled that she was a demigod and that she had to go to camp. He explained everything he knew. Even that he was one too! She was scared at first and didn't believe him. But, he kept pushing her to believe him. She finally believed him when Kelly and Shannon were getting their pj's on. She then said, "Who wants ice cream cake!?" They all then ran into the kitchen for cake and orange sodas. They bounced off the walls (It's an expression) basically from all that sugar. Kelly then took off their pants and suddenly looked scary. She had a bronze leg and a somewhat donkey type of leg. Shannon and her were terrified. Shannon then took out her sword while her dad heard the commotion and started shooting it with his bow and arrow. As it died, her father, and Shannon and her were getting into her dad's broken down car.

All of a sudden, she was in the car driving through strawberry fields. "Where are we going", she muttered over and over again. Shannon told her she was a demigod too and she was just visiting her dad. She turns out, was a child of Hebe too! William then got them out of the car and to the entrance. Before they got through, they saw a hellhound. Her father kept yelling to Gretchen, "Go Go Go!!" Gretchen ran and screamed, "Dad! Shannon!" as they were trying to defeat the hellhound. She then saw them get killed by the hellhound. As she walked through the entrance, she fainted.

She woke up in the infirmary surrounded by something that looked like soup but tasted AMAZING and people around her. "Where am I?" she kept saying. She then realized she was at the camp. She then realized her dad and Shannon were killed. Alexander the great told her she was a daughter of Hebe and this was camp half blood. She thought a while and said to herself, "Im only staying because someone died for me." She then shrugged and the rest is history....

Hebe is peaceful for her youthful soul. When your young, you play, you dance. Your free in the wind. You don't have a lot of homework, you could even hang around the beach! It's a happy life that goes by so fast. Hebe's power-set makes children of hers looking younger then most people. It's fun to be young! Youth is adorable to me and I think this is why Hebe is a fine candidate for this Theme:

Being young means being free, Learning How To Play, Having New Friends, Not Having Tests To Stress About, Not Caring If Anyone Is Being Mean To You (You will forget.), This Is Why I Think Hebe Could Be Considered "Peaceful."

Retrieved from "https://camphalfbloodroleplay.fandom.com/wiki/Contest:Character_Theme_Contest/Gretchen_Hazel_Madden-_Katniss%27s_Entry?oldid=1503211"
Community content is available under CC-BY-SA unless otherwise noted.