Start a Wiki
Cries of War 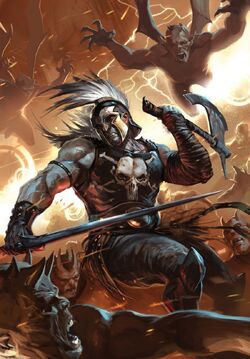 You've woken up in a dark, gloomy throne-room, your eyes are groggy, everything's taken up an apocalyptic setting. As you sit up, you turn to your right and see you're not the only one who's been taken to this place. You turn and face forward, and you're suddenly blinded by a radiant, golden throne, with steps leading up to it. You continue to squint until your eyes adjust to its immaculate glow. After the dazzle and glint of the throne dissipates, you can make out someone on it. An angry, grim look is on his face, though his eyes and pale face show signs of fatigue and weakness. As the others around you get up, the man on the thorn stands, and two younger looking men come by his side. The man pounds his spear on the ground, and all eyes are directed to his presence.

After the first tournament, Ares loved the rush that was brought in by the amount of fighting and bloodshed going on, so it lasted him quite a long time. The rush affected him like a drug, so he wants more. And because he's a god, and all, he can get more easily. The contest will be in a tournament style and I'm only taking multiples of 16, so the setting of the battle's is basically like the Roleplay Battle Royale. If you have any questions regarding the contests feel free to message me. There will most likely not be another one, unless I get more requests. If so, then I'll consider it being an annual thing.

The Winner still gets to make their character, if they created a character for this contest, but if they would prefer a different prize, that is their choice, and they would still have to go through claiming. For instance, I have character spots I'm not using, so for me, if I enter and won, I'd rather count the new character as a major, and pick the use a famous model or power up early prizes.

Match 3: Onyx vs. Kevin Nobody

Winners of Above Playoffs

Retrieved from "https://camphalfbloodroleplay.fandom.com/wiki/Contest:Cries_of_War?oldid=1354062"
Community content is available under CC-BY-SA unless otherwise noted.