Start a Wiki
The God/Goddess of the Month 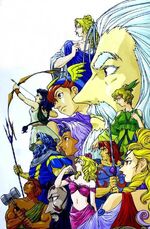 Do you adore a specific god or goddess? Do you want to tell the others that you like them? Well, you may do so here!! Welcome to the voting page for The God/Goddess of the Month!!!!!!!!!! You may vote for your favorite god/goddess here!

Every month, five gods and goddesses are chosen, and put into a poll. Then, users vote. At the end of the month, the winner is the "god of the month" or the "goddess of the month". Vote by putting your signature (using four of these ~) under the name of one of the gods/goddesses. Then press 'enter' to make another number for the next person. Also, update the heading of the god/goddess you voted for to update how many voted for him/her.

Retrieved from "https://camphalfbloodroleplay.fandom.com/wiki/Contest:God/Goddess_of_the_Month?oldid=948801"
Community content is available under CC-BY-SA unless otherwise noted.