Welcome to the first round of the Halloween Battle Royale!

Rules are simple. Each user has to pick a power that their character has, and come up with the most creative way to use that power in a fighting post. Basically pick a power, and come up with the most creative fight post you can utilising just that one power you chose against the assigned monster (as well as any non-power related things, weapons, physical environment, etc). The post should be reasonably long, but not novel length, preferably one to two paragraphs tops.

The assigned monster for this group is: a Lycanthrope! 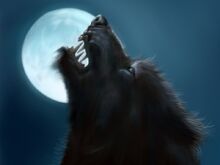 P.S. - It is up to the user if they wish to use their character's WB or use the {{Post}} template.

Power:Children of Astraeus generate an orbit around themselves for a short time, all attacks and people near the user get caught in the orbit, causing them to fly around, unable to attack the user. The user cannot move while the orbit is active.

Arena: Technology
Power: "Children of Iris are able to create up to 3 semi-living constructs out of pure rainbows to fight for them for a short time, the constructs can be no larger than 2 to 3 times the size of the user. They will follow the command of the user and the longer they are kept and the more that are made, the more energy is drained"

Power: Passive power #4 Children of Aristaeus possess hands and feet which allow them to fasten onto and climb vertical and horizontal surfaces without falling, much like how bees can.

Retrieved from "https://camphalfbloodroleplay.fandom.com/wiki/Contest:Halloween_Battle_Royale/Round_1/Group_2?oldid=1706433"
Community content is available under CC-BY-SA unless otherwise noted.