Welcome to the first round of the Halloween Battle Royale!

Rules are simple. Each user has to pick a power that their character has, and come up with the most creative way to use that power in a fighting post. Basically pick a power, and come up with the most creative fight post you can utilising just that one power you chose against the assigned monster (as well as any non-power related things, weapons, physical environment, etc). The post should be reasonably long, but not novel length, preferably one to two paragraphs tops.

The assigned monster for this group is: a Minotaur! 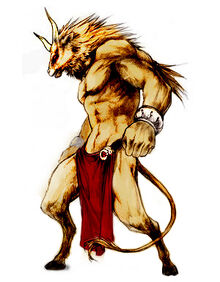 P.S. - It is up to the user if they wish to use their character's WB or use the {{Post}} template.

Power: Children of Apate can create illusions in order to twist other's perception of reality or make everyone around them see something that isn't really there. However, the illusion isn't physical and therefore is only a trick of sight. The bigger the change in perception, the more power drained. They can also delude single individuals in the same fashion.


Power: Children of Zeus have the ability to create a large lightning storm which will begin to randomly strike the nearby area with large bolts of lightning, with no regard to friend or foe; doing so drains the child of Zeus extremely.

Retrieved from "https://camphalfbloodroleplay.fandom.com/wiki/Contest:Halloween_Battle_Royale/Round_1/Group_3?oldid=1706743"
Community content is available under CC-BY-SA unless otherwise noted.