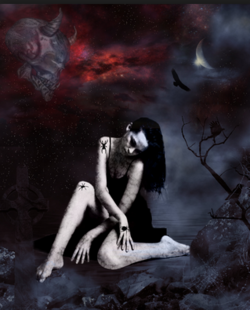 AKHLYS (Achlys) was the personified spirit (daimona) of the death-mist--the clouding of the eyes preceding death. She may also have been the goddess of deadly poisons. Akhlys was probably numbered amonst the Keres. PARENTS. Probably a daughter of NYX, though nowhere stated.

Some say she might've been the Protogenoi of misery and poison and the keeper of the Death Mist.

The Akhlys Cabin is just as poisonous as one would imagine. By the front is a tree that bears incredibly sweet, but poisonous fruit surrounded by poisonous flowers. The children of the cabin enjoy picking the flowers and eating the fruit of their beloved tree. Of course, they are clearly painted warning signs that would deter other campers from being harmed.

The cabin itself is made out of a dull brown wood that is slightly toxic and can irritate skin due to extended contact. The windows rarely open. A set of red poisonous mushrooms can be found growing all over the fence porch that can be easily plucked off.

Posted on the door is a Bio Hazard sign and incoming guests are asked to wear one of the gas masks to ensure their own safety. The Cabin is enchanted to emit a lightly poisonous gas that is said to make Akhlys' children more mellow and relaxed. Any fruits, candy or anything edible left laying around is dipped in poison, another sign is left to warn guests of that. Strangely enough, the rooms themselves don't contain any sort of aroma. The main attraction of the cabin is a collection of poisonous bugs kept in glass cases like a zoo. Another magical aspect of the cabin is that the poisonous material mentioned before (even the bugs) cannot be taken away from the general area of the cabin or it'll instantly disintegrate.

3 Months after Character is Made

6 Months after Character is Made

9 Months after Character is Made 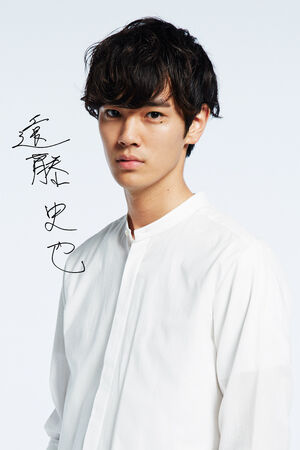 Being a slacker, Benji constantly displays a lazy and indifferent demeanor about most things. He believes that life should be enjoyed and not much matters except for that. Demigod heritage be damned, he doesn’t think being a demigod makes him or anyone that special since it causes so many potential issues for them. He doesn’t care about anything that doesn’t really affect him. Due to his belief, Benji typically tries to find some humor in whatever situation he’s in.

Ever since he was a teenager, the son of poison has been quite in love with the effects of smoking weed. Enjoying the peace and clarity that it gives him. Benji is quite a social man, finding himself the most comfortable around people that respect and even take part in his way of life. He believes in judging people by who they are, not necessarily believing that godparent stereotypes are absolute rules.

Shoto Hamada was a young Japanese immigrant, having moved to Los Angeles after a tenure at Camp Half Blood. As a son of Apollo, Shoto was a respected demigod who fit right in. Though after leaving Camp, he had some strange interests. He had a strange and morbid interest in poisoning people, whether it was friends, co-workers or even family. He loved seeing people suffer by his hands without even knowing it. But after his horrible activities led to several deaths, he decided it was best to live out in America.

Something about Shoto’s story interested a certain and relatively unknown goddess on Olympus. Many of Apollo’s children had went on to become Olympic archers, doctors and so on. Most didn’t know that he was also god of plague and disease, apparently Shoto was the rarity who focused on this trait aside from the others. Akhlys was the goddess of poison and couldn’t help but enjoy seeing a man enjoy her toxic creations. She figured Shoto was cute enough and that she could’ve used more children around anyway.

After managing to pose as a mortal woman and date him for a few weeks, Akhlys had her way and promptly left. Not going anywhere until she was absolutely sure she was pregnant. As a goddess she was able to give birth much faster than a mortal could and left the bastard child she desired by Shoto’s doorstep. As an experienced demigod, the man was able to figure out exactly what had happened. Only question was whether the mother of his newborn son was a notable goddess or not.

Growing up, Benjiro never felt particularly close with his father. The man had managed to give up habit of poisoning people and was haunted by his desire to keep doing so. More concerned with his own sadistic desires than being a dad, Shoto had turned to rampant alcoholism. This caused Benji to grow up feeling unwanted and unimportant as a child. Desiring that warmth and affection he carved from his father, only to receive small amounts of it.

Shoto didn’t think he needed to give his son much attention, only giving him the basic necessities and a few items such as toys and games to keep him out of his hair. Carving any sort of love and affection, Benji had become a very social child. Trying his best to act out for attention and make people laugh so they’d befriend him.

So Benji and Shoto had a strong divide between them until the boy was 13, the man had never wanted to be a father but knew his son was too special to give away. When Shoto had told him of his demigod heritage, he merely thought his dad had been drinking again. But once he talked about how he’d need to train him to defend himself, it seemed like the perfect excuse to actually do something with his dad for a change.

Honestly learning how to fight these supposed monsters felt like a chore, Benji had asked his father over and over about this crazy demigod thing and every time he explained it sounded worse and worse. Being hunted by monsters, not being able to use phones and having a parent who had an excuse to be a deadbeat. The teen tended to have a negative view on most things in life.

Fortunately after he turned 14, Benji had to use that weird transforming spear his father gave him to impale a harpy. He felt his friends probably would’ve thought all of this was cool, but he considered the experience rather scary and unpleasant. Since the demigod decided he’d simply miss his mortal friends if he ever went to Camp, he ended up keeping his normal life while handling the occasional monster attack. He ended up becoming a rampant pothead in high school with his stoner friends.

At this point in his life, Benji had become less caring and far more fun loving. Determined to focus on enjoying himself rather than his relationship with his dad and unfavorable status as a demigod. As he got older, fending himself from monsters and getting high constantly Benji felt like he was becoming happier when he just stopped caring. He adopted a form of optimistic nihilism, taking joy and comfort in the belief that life should just be enjoyed and that nothing really mattered in the end.

After graduating high school, he ended up attending Camp Half Blood since he didn’t feel like living with his dad anymore. He was claimed by Akhlys, the goddess of poison and this was annoying since it’s not like his mother had a cabin. Having to stay in the Hermes Cabin with the other rejects wasn’t fun but he adapted and stayed for a few years before leaving to try handling himself.

Though after a close call after he nearly got arrested for drug possession, Benji ended up deciding he was better off living at Camp where there was no rent or police to worry about.

Retrieved from "https://camphalfbloodroleplay.fandom.com/wiki/Contest:New_Cabin_Contest/Akhlys-_Hydro%27s_Entry?oldid=1767513"
Community content is available under CC-BY-SA unless otherwise noted.