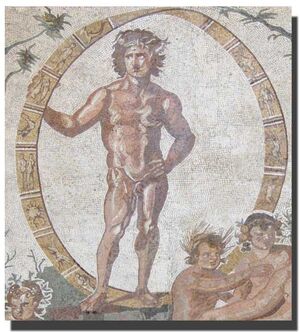 Before the world and the gods were created, there was nothing but time itself, unlimited and indeterminate. This was a period known as the Unaging Time. Thus, Chronos is believed to be the first deity by many. Often confused for the mad King Titan of Destructive Time, Chronos is the embodiment of linear, chronological time. Similarly, due to his involvement in the period of Unaging Time, Chronos is widely considered to be eternity personified. He is thus associated with mystery religions concerned with the afterlife. He and his consort, the goddess Ananke, enveloped the primordial world-egg in their coils and split it apart to form the ordered universe of earth, sea and sky. After this act of creation the couple circled the cosmos driving the rotation of heaven and the eternal passage of time. To date, the number of his worshippers have dwindled, but he and his legacy lives on, fueled by the weight of those that still believe, and the significance of his contribution to the universe.

You would likely expect the Chronos Cabin to be equally as - if not more so - exuberant than Apollo and Zeus' cabins combined. To be perfectly fair, you weren't wrong. Though at first sight it looks like a cabin made of solid gold, exposed to direct sunlight it reflects your happiest memories - the ones that remind you of what you have worth fighting for. It's a blessing by Mnemosyne after all the right favors were done at all the right times, for those who feel overwhelmed by the waves of time & fate. At the entrance are two large hourglasses, at each side of the doorway, turning once at midnight and once and noon. The front door is big, also made of solid gold, and the handles are two of the scythes typically associated with father time.

The cabin is every bit of majestic as you'd anticipate it to be, though it differs from the rest in the sense that in the middle of it all, there is no intimidating statue glaring down at you. Instead, it looks like a luxurious cabin, with a portrait of Chronos donning one of the walls and portraits of his children surrounding it. It has been endearingly referred to as the Wall of Memories, as it's enchanted to portray the moment the child reached ultimate success or felt most happiness. There are those few blokes whose happiest memories aren't exactly the happiest, but most newcomers tend to ignore those details.

There is one enchantment put upon the cabin that can't be sensed unless your a child of Chronos. Time flows a little bit differently in the cabin, not by large amounts though. It all goes by how long people think a minute is. One individual could feel that a minute is in the 40 second mark and thus, a minute in the cabin is 40 seconds outside the cabin

Though one of the biggest, shiniest, most extra cabins there is, it fits with the average persona of a child of Chronos, thus easing things over. 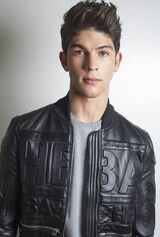 Jax is a strange young man. He talks himself up a lot . He just evens talks in genral. Jax doesn't really knows much abouth thre time he id in so he asks a lot of questions and just general acts pretty happy/div>

Yeah, before you start going on about how can I be alive because my father is tiny chopped up pieces in Tartarus, Chronos was first, then came my father's upstart half brother, Kronos. So anyway, yeah, I'm a son of Chronos and an Indigenous Australian and was raised by a Japanese man instead of my mother. Gedala Alinta was a women out of time. A women how lived ways just like her ancestors did hundreds of years ago. A women that seemed to live in another time. My parents met and well, to put it simply, my dad was in the form of a Caucasian male. It was a pretty odd meeting and pairing, especially in the late 1970’s. Yeah, I know that makes no sense, my parents meeting in the late 70’s but I was born in 1980. I will get to that later. Anyway, my parents met on the land of the Dharawal people, in the Yuin nation, which is now a part of the Wollongong area. Mum and Dad only met because Dad was an 'Ranger' and he was trying to gather information on the rock wallaby population of the area. Dad put himself into a position that he would get hurt and Mum would find him. That's what happened and Mum instantly fell in love with him. Things happened and my mum became pregant but didn't know it.
Retrieved from "https://camphalfbloodroleplay.fandom.com/wiki/Contest:New_Cabin_Contest/Chronos_-_James%E2%80%99s_Entry?oldid=1768451"
Community content is available under CC-BY-SA unless otherwise noted.