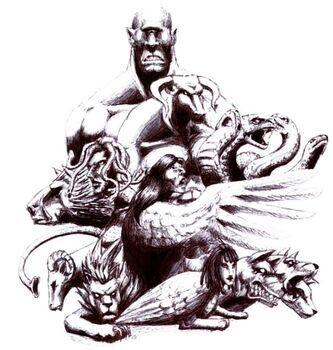 After hundreds of years it's quite plausible that someone might create a new monster, a god, a titan, maybe a couple of old monsters got it on (not really sure how having monsters works), or maybe while Typhon was out and about 15 years ago, he had another kid. So here's your chance to put your creative juices to work for the benefit of the wiki.

Monsters may not be roleplayed, but if new forms of nymphs can be created that weren't in Greek mythology, why not special monsters, a kind nobody has ever heard of? You might expect only a god could be able to create a new species. Perhaps it was on accident, or to destroy something, well now is the time you can create your own species of monster. Let your creative side roam free... just like these future monsters.

Retrieved from "https://camphalfbloodroleplay.fandom.com/wiki/Contest:New_Monster_Contest?oldid=1441784"
Community content is available under CC-BY-SA unless otherwise noted.