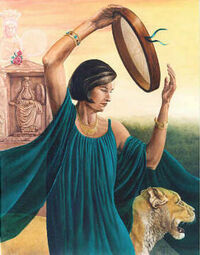 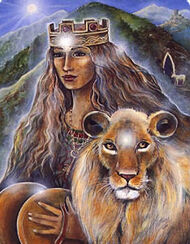 Cybele is a Phrygian goddess from Asia Minor. She was worshipped as a primal nature goddess residing in the mountains of central and western Anatolia. She was the goddess of caverns and held her sanctuaries at mountain tops. Cybele was later adopted by the Greek colonists in the region. In Rome, she was regarded as a Trojan goddess and was named Magna Mater (Great Mother) honoured as the goddess of resurrection and rebirth.

In Greece, she was usually confused with Rhea, another mother goddess. Cybele is usually accompanied by the Korybantes, her enthusiastic priest-gods who with drums, cymbals, horns, and in full armour, performed their dances in the forests and on the mountains of Phrygia. The lion is sacred to the mother of the gods, because she was the divinity of the earth, and because the lion is the strongest and most important of all animals on earth. She harnessed these creatures to her golden chariot. Because Cybele presided over mountains and fortresses, her crown was in the form of a city wall.

Cybele was sometimes referred to as Dindymene or Dinymenian Mother because she was born on Mount Dindymus. Zeus had lay with Gaia and gave birth to a daimon with both male and female organs.

The gods fearing this creature upon reaching adulthood had the daimon being castrated, thereby causing the creature to become a female being. The creature became the mother goddess, named Cybele, though in Pessinus she was named Agdistis, after Mount Agdos. The gods threw away the severed organ, and instantly an almond tree grew on that spot. Cybele out of shame left Olympus in favour of the wilderness and thus severed her connections with the Olympians ever since.

One day, Nana, the daughter of the river god Sangarius, was playing under the almond tree, when one of the almond seeds fell on her laps. The seed disappeared and Nana became pregnant. Nana gave birth to a son named Attis, whom she exposed in the wild. Attis was saved, because the infant suckled by a goat.

Attis grew to be a very handsome youth, whom Cybele fell in love with. However, Attis' father had the youth betrothed to the daughter of King of Pessinus. Jealousy had caused Cybele to drive the king and Attis mad where they castrated themselves and died. Cybele regretted her part in causing Attis' death, so she had Zeus made him a god. Attis became the god of fertility and rebirth. Her annual spring festival celebrated the death and rebirth of her beloved consort, Attis.

According to one legend, Cybele coupled with a mortal king, named Gordius, the Phrygian king of Gordium, and became the mother of Midas, the founder of Ancyra and the famous king with the golden touch.

Retrieved from "https://camphalfbloodroleplay.fandom.com/wiki/Cybele?oldid=1625434"
Community content is available under CC-BY-SA unless otherwise noted.