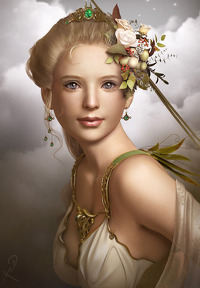 Demeter is the Goddess of the Harvest and Agriculture, who presided over grains, the fertility of the earth, the seasons, motherly love, and the harvest. Her Roman form was the goddess Ceres. Demeter is the middle daughter of the Titans Rhea and Kronos. She's the younger sister of Hestia and Hades, and the elder sister of Hera, Poseidon, and Zeus. With her brother Zeus, she conceived Persephone, and was broken-hearted when she was kidnapped by Hades.

Demeter was swallowed upon her birth by her father along with Hestia, Hades, Poseidon, and Hera, they were later saved by Zeus to help defeat Kronos and the Titans. After the war, Zeus and Poseidon tried to marry her, but Demeter instead devoted herself to her duties as the goddess of the harvest. Though Zeus was married to Hera, Demeter had a relationship with him that resulted in a daughter, Persephone. Though the affair ended, Demeter was very happy as she had a beautiful daughter all to herself. Persephone grew up without want, always staying close to her mother and sharing some of her power over the earth. 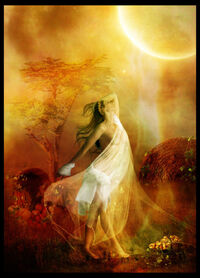 Demeter was the goddess of grain and bread, the staple food of the ancient Greeks. She was also, by contrast, the goddess of starvation and hunger. When the crops failed, hunger would quickly follow. Like most of the Greek gods, she represented a force of nature, which in its dual nature could bring either blessing (a bountiful harvest) or curse (crop failure). 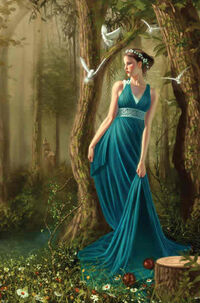 Demeter is most notable for the abduction of Persephone by Hades. Demeter was devastated by her daughter's abduction and swore that she would keep the Earth barren until her brother agreed to return Persephone. Seeing no other choice, Zeus sent Hermes to fetch the young goddess but Persephone had since fallen in love with Hades and having eaten 6 seeds of a pomegranate, she was now bound to reside in the Underworld for six months of each year during which Demeter refuses to allow life to grow on the earth.

Powers
Demeter is the goddess of the Harvest. She has the special ability of chlorokinesis (manipulating and control over plants). She has the ability to transform things into plants, and the ability to manipulate plants, and the and of distances. She is a very powerful goddess, and her daughter has similar powers, but is not as powerful as her mother, and when she is in the Underworld she fades like a flower underground.

Retrieved from "https://camphalfbloodroleplay.fandom.com/wiki/Demeter?oldid=1569409"
Community content is available under CC-BY-SA unless otherwise noted.