Dionysus is the god of grape-harvest, wine, ritual madness and ecstasy as well as theatre. Dionysus was often called the 'twice born' because of the two myths around his birth. The most common is that his mother was a mortal woman named Semele, who was a daughter of the King of Thebes, and his father was Zeus. This makes him the only Olympian to have a mortal parent, and according to some traditions the only one to have been born a mortal.

He invented wine and spread the art of tending grapes. He has a dual nature. On the one hand bringing joy and divine ecstasy. On the other brutal, unthinking, rage. Thus, reflecting both sides of wines nature. If he chooses Dionysus can drive a man mad. No normal fetters can hold him or his followers. 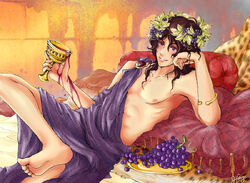 He was depicted as either an older bearded god or a pretty effeminate, long-haired youth. His attributes included the thyrsos (a pine-cone tipped staff), drinking cup, leopard and fruiting vine. He was usually accompanied by a troop of Satyrs and Mainades (female devotees or nymphs).

Dionysus is the son of Zeus and Semele. He is the only god to have a mortal parent. Zeus came to Semele in the night, invisible, felt only as a divine presence. Semele was pleased to be a lover of a god, even though she did not know which one. Word soon got around and Hera quickly assumed who was responsible. Hera went to Semele in disguise and convinced her she should see her lover as he really was. When Zeus next came to her she made him promise to grant her one wish. She went so far as to make him swear on the River St, yx that he would grant her request. Zeus was madly in love and agreed. She then asked him to show her his true form. Zeus, was unhappy, and knew what would happen but, having sworn he had no choice. He appeared in his true form and Semele was instantly burnt to a crisp by the sight of his glory. Zeus did manage to rescue Dionysus and stitched him into his thigh to hold him until he was ready to be born. His birth from Zeus alone conferred immortality upon him.

Dionysus' powers are based around plant growth with a strong focus on products of the vine. He can quickly summon multiple vines strong enough to ensnare, strangle, and even break his enemies into pieces or encourage more benevolent growth. It is unknown to what degree he can control the growth of plants not based on vines. He also is able to apparently transform anything into wine, as he stated at one point "The next person, or horse, who calls me the "wine dude" is going to end up in a bottle of Merlot." He can also induce or cure madness, as shown in the Titan's Curse and the Battle of the Labyrinth respectively

As the god of madness, he can easily cure and ease madness. He also has the standard powers of a god, including levitation, teleportation, conjuring items and transforming people, as well as incinerating them.

Dionysus usually creates his own drinks, but he is prohibited from drinking wine during his punishment so he is reduced to making Coke appear from thin air.

Retrieved from "https://camphalfbloodroleplay.fandom.com/wiki/Dionysus?oldid=1570092"
Community content is available under CC-BY-SA unless otherwise noted.