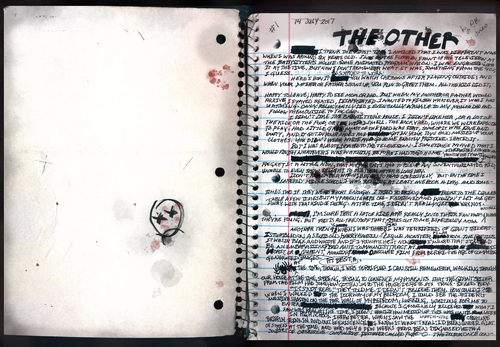 "This is Andrew Campwood's personal journal, created to depict his several escapades, in which he chose to name 'Murder Notebook'. Most of the gruesome details have been rewritten, censored, and/or completely removed. That includes many of his thoughts, actions and beliefs, as many are too explicit for public eyes." the chief of police stated. What he intentionally didn't state, to avoid panic, is that every night, the notebook disappears from police custody, and reappears the next day...with another entry. Not to mention, Drew was unable to be located by police. As he started reading, he sighed, visually reliving Drew's several escapades (none searched Camp Half-Blood).

Stress...oh my gods! Today, I stole this book back from the cops, to find most of my escapades blanked out, or torn out. Oh, I spent so many precious years on this book! Nevermind that, though. Today, I went out for my daily "man hunt", but this time, I brought my friend Kaitlyn. Oh, I forgot, I never mentioned her, she's nuttier than I am! Anywho, I was wearing my regular black leather jumpsuit and went to her cabin, and she was dressed in a full white HAZMAT suit! I asked her, "Yo, Kaitlyn, what's with the suit?". Obviously, the suit was unneccessary, we were just going to bomb a few houses, maybe a couple of cars (originally said several statements about love of torture, that was taken out), and she says to me, "When I eat my food, I don't want to get my clothes dirty. Or my hands." Sigh, she's such a cannibal. After that, we hopped in my black van and drove around the city. I had about four, maybe five homemade pipe bombs, a couple of molotovs, a car battery, a lockpick set, and two C4's. I know, I was pretty underprepared, but I used most of the explosives already, and I needed money to fly out to Alaska for my yearly bomb shopping (refers to Code Red, an explosives manufacturer), that's why me and Kaitlyn were stopping at a bank first. Long Island Mutual Bank was fairly new, recently built, and had pretty low security, so it was an easy job. Kaitlyn, as always, had a plan. Not going to lie, it was pretty solid. "Okay Drewie! (Kaitlyn Williams' nickname for Andrew Campwood) So here's what we do! I go in, scout the place out. Meanwhile, you drive around back. I'll meet you back there afterwards. I'll open the garage in the back that's usually for money trucks, and then you'll use one of the C4's to blow the safe off. Or, if we have time and you don't want to use the bomb, you can use that big, beautiful brain of yours to try to figure out the code. The safe's likely electirc, by the way, so your lockpick set won't work. But knowing your pyromaniac mind like I do, you'll likely want to bomb it. Sooo, just don't get us killed, okay." Haha, she knows me so well. "Same to you" I told her, then kicked her out of my van. Literally. She skipped up to the door, and the guard looked at her funny. After all, she was wearing a HAZMAT suit. When she walked in, the guard followed her. Before the doors closed, I saw her look around, give me a thumbs up, then...the entire bank filled with her flames as the door shut, stopping my view. Gods, even to this day, I wish I saw the fire!(originally said more about fire, and slowly switched from pyromania to necrophilia). As I drove to the back, the garage opened, and Kaitlyn was standing there, smiling, as always. As I drove in, she took off the HAZMAT mask, and blood I'm quite sure wasn't hers was slathered across her mouth. "How many?" I asked, knowing she'll know I'm talking about how many people she ate. "I only had time for two hands, unfortunately." Kaitlyn said. I sighedd, grabbing a C4 and leftover duffel bag from the back. As I walked to the safe, I savored the heat of the flames and the smoke of the flames, and watched as Kaitlyn savored a few more hands from unlucky guards. As I reached the safe area, I could hear sirens approaching. "We gotta hurry." I remember saying. So, I placed the C4 on the door, backed away a few feet, then triggered the explosive. The safe door blew open rather easily, to my relief. I ran in, stuffed about $100,000 in the duffel bag, then took off. It was Kaitlyn who stopped me. "Hold up, Drewie! Maybe we should have some...fun." Kaitlyn smirked playfully. Whispering in my ear as if telling me a childish secret, she said "We have a van back here, why don't we pack all the money we can find in there...it'll give us an excuse to kill more!" she said, looking at me with pouty eyes. "Please!! With extra blood-covered sprinkles!" she begged. Honestly, I was on board at "kill more", but for annoyability, I groaned and said "Fine...". As I grabbed the van and drove into the narrow room, knocking down a few fragile walls, I saw six firefighters run towards the van. After noticing me, they backed up slowly. As Kaitlyn packed the money into the back, we took turns ending the lives of adventurous officers (many gruesome details removed). By the time we finished, half the police force was outside the bank, which was almost completely engulfed in fire. Although we barely got out without being burned alive, we got away with every last cent in the vault, leaving us with a grand total of $2.5 million. Score! Unfortunately, I used up the rest of my bombs during the getaway, but who cares! It was so fun, and I can't wait for the next heist. Tomorrow, I'll fly out to Alaska, but I'll likely go on another expedition there, too!

Retrieved from "https://camphalfbloodroleplay.fandom.com/wiki/Drew_Campwood/Murder_Notebook?oldid=1778940"
Community content is available under CC-BY-SA unless otherwise noted.