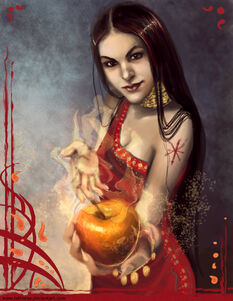 ERIS was the goddess or spirit (daimona) of strife, discord, contention and rivalry. She was often represented specifically as the daimon of the strife of war, who haunted the battlefield and delighted in human bloodshed.

In Greek mythology, Eris is the personification of strife and chaos. Eris was born from Nyx and had no father though this changes with each myth. All of Eris' siblings are spirits of death; Thanatos, Oizyz, Hypnos, Lyssa just to name a few. Eris is also equated with Enyo, the daughter of Zeus and Hera.

Eris was feared for her unforgiving and wrathful nature. Though despised by the Olympians, They apprehensively respected her power. It is Eris who drives the conflicts and disputes of both gods and men.

When Thetis the sea nymph was married to Peleus as reward for his undying devotion to the gods, only Eris was uninvited to attend the celebrations on Olympus. Offended, Eris snuck into the dining hall and threw a golden apple that was inscribed: ‘For the fairest’ in the midst of the gods. Every goddess claimed the fruit for themselves and the decision came down to three: Aphrodite, Athena and Hera. Since none would step down, a mortal named Paris was chosen to make the final decision as to which goddess deserved the golden apple.

During the war, Eris rode into battle on the side of the Trojans alongside Ares. It was at Troy that she became known as the Lady of Sorrow. In one battle, she fought alongside Apollo and Ares in the defense of Aphrodite’s beloved son, Aeneas but otherwise roamed the battlefield, spreading bloodshed and carnage among the fighters.

Eris is the Greek word for strife. No known cults or temples are dedicated toward this Goddess of Strife so many believe her worship was done at home or by menacing civilian who wished to cause misery and bad luck upon his or her enemy

In Roman mythology Discordia is the goddess of choas and strife, her opposite is Harmonia/Concordia goddess of harmony and concord. 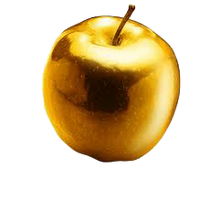 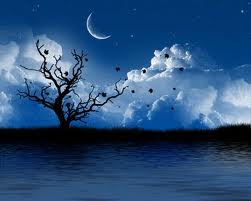 Two mortals named Polykethos and Aedon claimed to be more in love with each other than Zeus and Hera. This angered Hera so much, she sent Eris to wreak havoc on them. She went and saw the two. Polykethos was making a Chariot, and Aedon was weaving. Eris offered a challenge, the last to finish would have to present the other with a female slave. Aedon won, and Polykethos was angry. Polykethos grabbed Aedon's sister and disguised her as a slave. Aedon was furious, because she tormented the slave. She chopped her son up, whom Polykethos loved dearly, and fed him to him in a stew. The two then quarelled and kerfuffled, until the gods turned them into birds.

Eris escorted Typhon to the battlefield to fight Zeus. She also helped him by fighting Nike, Zeus' backup. This was most likely against her will, but possibly not.

Eris represents true malevolence and deviance, she has no morals of good and/or nobility, which is derived as her being a goddess of chaos. She is seen as spiteful, vindictive and passionate when it comes to the prospect of the world potentially crumbling into chaos; which she refers to as being a glorious event.

Eris is usually described as wearing a red dress. Though her appearance varies many portrey her holding a golden apple and having long brown hair flowing down her back, she's often shown carrying a knife or other weapon assosiated with chaos and strife. She is mostly shown with other gods or goddesses and is sometimes shown with wings thought this is not always true.

Add a photo to this gallery
♖Abilities♖

Even though she is not the most powerful God many of the other Gods fear her.

Retrieved from "https://camphalfbloodroleplay.fandom.com/wiki/Eris?oldid=1470881"
Community content is available under CC-BY-SA unless otherwise noted.