bracer consists of spear and shield

She is such a tomboy. She is a very serious person who hates to joke around. But sometimes, she does annoy people when she's in the mood. However, she makes exemptions. She treats her half-siblings differently compared to other people.

She is very difficult to please. She hates losing even in a very simple situation such as an argument (Actually it depends on who she's dealing with. Sometimes, she accepts defeat.). Despite her cantankerous side, there is also a side of her that will do anything for her loved ones even if it means to sacrifice herself.

She has her reasons of being so cold towards others. She just thought that if she got too attached to anyone, it would just hurt her when they leave her side so better not grow fond of anyone.

Spears had always fascinated Ares. It’s his favorite weapon. One day, he decided to go and watch a sports contest. Actually, he just went there to watch the javelin part. A very amazing athlete named Evelyn Lindon caught his eye. He watched her intently and had fallen for her that instant. Evelyn always won in javelin contests. There was one time when Ares challenged Evelyn in javelin. She accepted it and, of course, the war god won. But Ares told her to date him since he won. Evelyn didn’t see anything wrong there and so they did. Months later, Evelyn got pregnant and Ares finally told her who he really was. He gave her a spear, which the child will use when she's older, and told her to give it to the child when she's ready.

Four years later, Faith was born. After three years, Evelyn married an inventor named Arthur Justice, who now became Faith’s stepfather. He was famous for most of his patented inventions. Together, they raised Faith. But it didn’t become easy for Arthur. Faith didn’t like him simply because he is not her real father.

When Faith was six, she was diagnosed of ADHD and dyslexia. At her young age, she got interested in javelin. Sometimes, she went with her mom when she practiced for an upcoming sports event. Her mother taught her seeing the child’s interest in it.

Faith turned 10 and she already won many medals in javelin. Surprisingly, she never won bronze and silver. It was always gold. Even her mother couldn’t believe it and she was indeed very proud of her. During that year, Evelyn had to fly to Tokyo to train for her upcoming competition the following years. Faith was insisting to go with her but Evelyn told her to stay with her stepfather. Her inventor stepfather gave her something he had been working on. It was a bronze bracer. Her father said that she would need it later on though she didn’t know what he meant. She thought it was some kind of ‘peace offering’ but she told him that giving her something won’t change anything.

When she was already 13, Evelyn was returning to America. Faith and Arthur were going to fetch her. They rode a train going to the airport. They were going to drop off at the terminal station. But there were unusual things that happened. First, there were still three more stations and all of the people, except for them, had already left the train—very unusual. Next, when they got to the second to the last station, about three empousai boarded the train. Even Arthur saw them. Arthur isn’t mortal. He was also a demigod. He is, in fact, a son of Hephaestus. When Faith saw the monsters, at first, she thought they were people in costumes going to a convention. But Arthur started to back away and told Faith to stay behind him. Faith didn’t know what was going on. Then Arthur told her, “You see those two circles there on your bracer? Press the first one.” He didn’t have time to explain. The monsters started attacking and he summoned fire. Faith pressed one of the circles and it pushed out. She didn’t know what to do next and Arthur seemed busy fending off the monsters. She just experimented. She twisted it and it suddenly got off the bracer. She thought she broke it but it quickly transformed into a spear—made of celestial bronze. She never really paid attention to her bracer and she would have never knew there were circles and that it was a secret weapon if Arthur never told her. One empousa was behind her and she sensed it. The monster attacked but she had evaded it. She stabbed her spear at the monster and its body was went ablaze then disintegrated. Her spear burns anything it touches (of course except the user) Last unusual thing that happened in the train, it didn’t stop. The train had already gone beyond the terminal station and it wasn’t stopping. Arthur and she ran to the driver’s seat and they only found another monster. They were trapped. Arthur, being the son of Hephaestus, could have manipulated the buttons but they were running out of time. Faith told him to focus on stopping the train and she will fight the monsters. Arthur loved Faith like his own daughter but she saw the how brave she was and how great she was when she killed one of the monsters. He also knew that she was a daughter of Ares. Evelyn told him all about it and she gave him the spear. She trusted him to take care of the spear more than herself. Then he made modifications such as make it a part of an bracer.

Faith slashed and stabbed. An empousa had unarmed her and backhanded her. Her back hit the wall and her spear slipped from her hand. It was out of her reach then she suddenly remembered that there was another circle on her bracer. She pushed and twisted it. By the time the monster was about to attack, a shield had unfolded in spokes in front of her and she pushed the empousa back with it. She ran for her spear when she had the chance. The train stopped and Arthur and Faith decided to make a run for it. Since there were no more terminals, they had to run on the rails. It was storming outside making it difficult for Arthur to summon fire because rain just put the fire out. They had to fight the monsters mano a mano, which Arthur was never good at. Thankfully, a satyr came to help and they successfully killed all the monsters. Arthur told the satyr to bring Faith safely to camp. During the past years, Faith always wanted to get away from him but this time she didn’t want to leave him. She became worried about him. But Arthur told her that they were running out of time and she had to go. The satyr did his job even though it was against Faith’s will. She was brought to camp safely.

(All about how she became a huntress) WIP 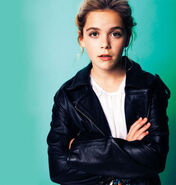 Retrieved from "https://camphalfbloodroleplay.fandom.com/wiki/Faith_Justice?oldid=1505483"
Community content is available under CC-BY-SA unless otherwise noted.