This character belongs to sean187jr

She is has a split personality. She is usually calm and friendly, but be careful when you provoke her, you may regret it. She is a friendly girl and tries to become friends with others. She is a bit of a klutz, but you don't see her like that always. She is a kind person who is ready to defend her allies and help them when they need it. Even though her mother is the goddess of luck and fortune, she does not rely on luck very much, only when situations really need it. She also has the sense of knowing other people's powers to know how to use them in battle.

She was born on September 25th, 1998 (aged 13 as of March 14, 2012) to Devaughn Castor and her mother Tyche in Alsace, France. Her father hid the fact that Tyche is a goddess to the best of his ability. To avoid being too noticed by others, her mother left her and her father. When she asks his father who her mother was, he always tells him she is far away and will come back after a long time due to work. They moved to Normandy, France and lived a peaceful life there. She attended a boarding school in a nearby town and stopped studying until her 12th birthday because a fire destroyed her school. Two days before her 13th birthday, Devaughn and Tyche met again. Her mother told him to tell Genevieve who her mother was then move her to Camp Half-Blood. When she stopped studying after the fire, she was taught on how to use a magical hammer given to her by her father which was given to him by Tyche in human form. She was confused at first why did she have to practice using a heavy-looking but lightweight hammer. Her father only reasoned that it was for her protection and self-defense. The hammer, which was said, is a magical hammer. But its true powers didn't show to her when she trained as to surprise her. When she turned thirteen, Devaugh revealed to her she was a demigoddess and her mother is a goddess. She was very surprised and happy. She is a current member of Camp Half-Blood and trains hard with her friends and allies to be strong whenever evil arises. When she arrived, she was told that her father moved again, this time in Bordeaux because he was alone in their home so he decided to live with his siblings Gordon and Yvonne. She plans to visit them there when she has free time. Meanwhile, she is having fun in the camp and works hard to become stronger. Even though chances are very slim and she has accepted the fact, she hopes of seeing her mother, Tyche.

Due to her being a demigoddess, she inherited eyes which are of different colors. This is her most unusual feature. She has long, beautiful blue hair that reaches to her waist. She wears black gothic lolita-like pigtails. She wears round eyeglasses because of her slightly poor eyesight. She wears a blue, black and white cape fastened to her neck with white fur on the end. She wears black gloves with with fur and a blue and white-colored collar which is connected to her cape. She wears high black stockings and shoes of medium height heels. She wears a short black skirt covered by a blue skirt opened it half to reveal it. The blue skirt is connected to a white belt.

Her weapon is a big two-sided magical hammer. It looks like a mallet. It is imbued with the power to increase or decrease one's luck according to her bidding. When she is still not a member of Camp Half-Blood, the hammer didn't reveal its powers as to surprise her. When she joined, it showed its powers when she used it. It is imbued with power that enhances its powers from being a normal hammer into a magical hammer. Tyche activated the hammer's powers when she joined the Camp. On the outside, it looks heavy but when Genevieve uses it, it is very light. It only weighs light to those the hammer trusts. It's like it knows who to trust or not when carried. When struck to the ground, it produces a weak quake. But when fully used, creates strong ones. It is only used for short-ranged attacks and luck-enhancing or luck-deteriorating powers. It was given to Genevieve by her father, Devaughn, which was given to him by Tyche herself (in human form). She is the one who created the magical hammer. Genevieve swore to protect it and never lose it, as it is her greatest gift she could ever have because it came from her mother goddess, Tyche. As she trains hard with her magical hammer, it reveals more powers to her. She carries it either by hand or by commanding the magical hammer to shrink into the size that fits to her pocket or bag. The hammer understands what she says. So when she says to it to turn into normal size, it will do so. When a person untrusted by the hammer touches it, the hammer will curse the holder with bad luck. When it is used by a person trusted by the hammer, it will bless the holder with slight good luck boost.

As she is a daughter of Tyche, her powers focus on luck and foreseeing the upcoming moves of enemies and allies, even the result of gambling. Aside from these powers, she uses her big hammer to smash opponents to ground and slam them into the air. 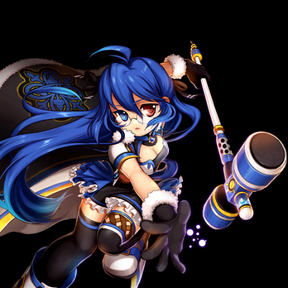 Genevieve with her hammer. 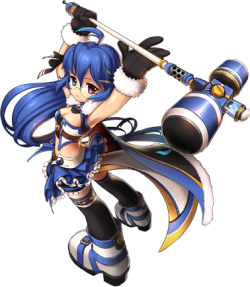 Genevieve raising her hammer.
Add a photo to this gallery

Retrieved from "https://camphalfbloodroleplay.fandom.com/wiki/Genevieve_Castor?oldid=1717429"
Community content is available under CC-BY-SA unless otherwise noted.