Georgia is a natural born leader. She has a drive for authority, which is well-served by her quickness to grasp complexities, her ability to absorb a large amount of impersonal information, and her quick and decisive judgments. She is a "take charge" and bossy kind of person. Georgia loves to interact with people. As an extrovert kind of person, she's energized and stimulated primarily externally. She only respects people who are able to stand up to her, and that argue persuasively for their point of view. Although she isn't naturally tuned into other people's feelings, Georgia frequently has very strong sentimental streaks. Often these sentiments are very powerful to her, although she will likely hide it from general knowledge, believing the feelings to be a weakness.

Melody Hales was a woman in her early 20's, living her life out on the farm with her father, in the countryside of Germany during. Melody was an only child, supporting her family's business, after her mother had passed away from major illness. Alone with her father, she worked in their farm all day, hoping to make a living, as they sold their agricultural outcomes in a nearby city. As Melody visited it to offer fruits and vegetables to stores, she never would have thought she would have caught the eye of an actual god in flesh. While walking along the narrow streets of the thereabouts, she bumped into Prometheus, who was simply visiting to see what edge humanity had came to. The young woman eventually had a conversation with him, leading up to a small stroll. She gave her number to George, as he called himself and the two met up a couple of other times.

The relationship soon ended after they had that "magical night" at a motel, Prometheus leaving the next day with nothing but a note for Melody to remember him by. It contained only information about his eternal love for her and that his departure wasn't made by choice. Nothing explained the arrival of a child, any less his true identity, as her father was actually a demigod child of Ares, and could figure things out on his own. The future grandfather was blessed by his godparent [Ares] to attract less monsters, only one per year at the best, for having accomplished a quest and granted a wish.

9 months later, the Melody had given birth to Georgia, who was named after Prometheus' supposed name. She decided to keep the child, not bearing the idea of abandoning a child regardless of the source and grew to forgive the god who had left her. The grandfather, Michael, approved of this as well, since he shared the same point of view as his daughter. Both of them, however, were unacknowledged of the newborn's true, half-blood heritage.

Georgia grew up to be an outgoing, energetic but persistent child. She learned to stand up for what she believes and to speak of her mind, regardless of the truth's impact on others, sometimes making her insensitive without realizing it. She was homeschooled from young age as she didn't have the opportunity to travel to the city everyday. The girl was a people-person despite not having the ability to interact with others, living in a lonely farm with only few relatives. She adapted to the situation by bonding with the animals her family possesses for a living, mostly with her pet dog Anthony. Concerning her academic level, her grades were average, as her determination didn't let her ADHD get the best of her. Unafraid of toil, she didn't refrain from getting her hands dirty while helping out her mother with the cultivation during her free time. In brief words, she lived a happy childhood for what it was worth.

Because she lived in the meadows and constantly helped out on the fields, her scent was covered by the muddy atmosphere that dwelled in the small house. Therefore, her monster attack did not occur until shortly after she reached the age of 14. The monsters mostly leaped towards the demigods in the city, as they were a more simple prey. She was working with her grandfather, after having finished her long hours of studies. A savage dog- no, bigger than a dog. A creature, had approached them while they rested on the fields for a short break. The grandfather, always being armed for safety, had thought it was coming for him. But after seeing that his young grandchild had shrieked, seemingly acknowledged of the hellhound's presence, he deducted that she was a half-blood, only sure after the beast had leaped at her and not towards him. Despite being old, he was still a child of fights, thus defeating the hellhound with ease. Georgia afterwards demanded an explanation, and got one. He told her about everything she had to know, even about camp. When she asked her if she could attend it, he told her that she wouldn't need to, selfishly insisting she would be safe with him. And so she did.

She kept living an ordinary life, aside from a few monster attacks, that were always easy to defeat. The grandfather had told Melody about their heritages, as he thought that she deserved to learn the truth. The mother took it well, understanding why George had left her. Neither of them knew the godparent's identity, but let the thought look in the back of their minds. Melody didn't her daughter to leave them at the moment, and took her father's word. The young demigod eventually turned 15, after a recent monster attack, and grew rebellious. She despised having to stay in a small farm, locked away from the outer world. Georgia forced her guardians to let her go to camp, the only place that came to mind. But regardless of her, they wanted to hear nothing. It was only after a close harpy attack that they finally agreed, thinking that the grandfather was much too ill to protect Georgia after almost getting seriously wounded while trying.

And so, as easy as pie, the mother left the farm to take Georgia to camp, finally convinced that she would be safer there. After getting a cheap plain ticket, they headed for America. Arriving at New York City, they followed the grandfather's instructions to orient themselves to camp, thus having the child of Prometheus safely entering camp and getting claimed, after a brief goodbye to her mother. 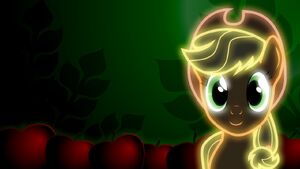 How She Relates to Others
Relationships

Retrieved from "https://camphalfbloodroleplay.fandom.com/wiki/Georgia_Hales?oldid=1748232"
Community content is available under CC-BY-SA unless otherwise noted.