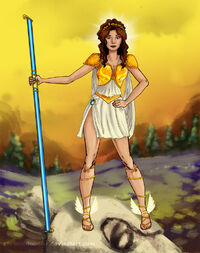 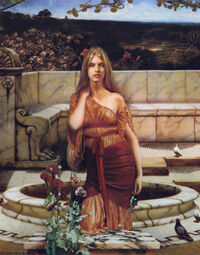 Harmonia was the goddess of harmony and concord. As a daughter of Aphrodite, she presided over marital harmony, soothing strife and discord; as a daughter of Ares, she represented harmonious action in war. Late Greek and Roman writers sometimes portrayed her as harmony in the more abstract sense : a deity presiding over the cosmic harmony.

Harmonia was born of Aphrodite's adulterous affair with the god Ares. She was awarded to Kadmos, the hero founder of Thebes, in a wedding attended by all the gods. Hephaistos, however, was still furious over his wife's betrayal, and presented Harmonia with a cursed necklace, which doomed her descendants to endless tragedy.

A string of family catastrophes caused the couple to emigrate to Illyria, where they battled various local tribes to establish their new kingdom. Later the pair were turned into serpents by the gods and transferred to the Islands of the Blest, to live in peace and harmony for the rest of eternity.

In ancient Greek vase painting Harmonia appears in two scenes : firstly as the bride of Kadmos, and secondly as a goddess in the retinue of the bridal Aphrodite. Harmonia's opposite number was Eris (Lady Strife).

Retrieved from "https://camphalfbloodroleplay.fandom.com/wiki/Harmonia?oldid=1570745"
Community content is available under CC-BY-SA unless otherwise noted.