Bruce followed in his older sisters' footsteps, becoming a doctor in something. Bruce specialized in eye surgery but worked as a normal optometrist, when he met Theia. His last receptionist was offered a job she thought paid better and Theia happened to take her place. Every once in a while after work, Theia would ask Bruce out for either dinner or drinks but Bruce would always say no, mainly because he was to busy helping his parents finish renovating their house. Bruce finally accepted Theia's offer for drinks once he finished helping his parents a few months later and they went out for drinks in a nearby bar. They both felt they had a connection and started dating. Bruce was soon offered to actually be an eye surgeon in Washington D.C, America, he accepted and Theia came with him. 6 months after arriving in America with Bruce, Theia give birth to a baby girl and left her with Bruce with nothing more than a letter that said to be opened on their daughter's 10th birthday. A few days after Theia left, Bruce started to notice something different about his daughter, named Harmony. She seem to cry whenever there was light in the room. So Bruce took her to his work and had a look at her, finding out Harmony's eye were extremely sensitiveness to light.

Bruce raised his daughter by himself with the casual phone call to Lisa and sometimes Amy for help. Bruce never opened the letter because he could fell that there was something different about the letter and something bad might happen if he did, because there was a lot of things he never knew about Theia's life. Harmony never knew about her extended family because around the time she turned one, her grandparents died which started a fight between Bruce, Amy, Lisa and their eldest sibling, Jack, about Bruce wanting more than what his parents left for him. Bruce had planning to move back to Australia but when the fight with his siblings happened, he just gave up trying to move back home.

Harmony was always different when she went to school, with her dark glasses, staying in the shade all the time and not being as smart as everyone else was only the obvious things. Harmony met a girl when she was 9 that was more different than her, she was more concerned about nature than people and eyes were very different. Harmony and the girl, Luka, became best friends and little did Harmony know that Luka was actually a light nymph sent to take whatever demigod she found to camp. Just as Luka was going to talk to Bruce about taking Harmony to camp, Theia told Luka to leave Harmony where she was and not to take her to camp unless Bruce said she could.

On Harmony's 10th birthday, she finally opened the letter. She and her father both read it and they both found out that Harmony's mother was a Greek Titan and came with two rings. Bruce just didn't believe it until he remembered what his sisters told him what happened to Lisa a year before Bruce met Theia, finding the odd stuff from different planets, and stopped their argument for a little bit and called her up about if what the letter said could be true. Lisa's story seemed to match Bruce's and so did Amy's, so Brcuce got accepted that Harmony's mother was a Greek Titan. Harmony other hand, just thought it was a joke from her dad, using it as a way to give her his presents for her, so she kept the rings. That night, Bruce got a dream from Theia and she told him what to do when he thought Harmony was old enough, which was to call Amy and get her son, James, to take her to Camp Half-Blood.

When Harmony turned 12, her whole world tipped upside down because she finally believed her mother's letter. She was walking home from school when a guy that had been bullying Harmony for years about her sight and glasses, ran into her, making her glasses come off. Harmony instantly ran into the shade and closed her eyes as it was an instant reaction she had learnt to do every time her glasses came off. Before the bully tried to break Harmony's glasses, Luka stepped in and got them from her. Luka and Harmony then started walking the long way back to Harmony's house and out from the skies came a flock of of Stymphalian birds on Harmony and Luka. Harmony screamed and a few of the birds where a little bit stunned. In Harmony's left hand, a sword appeared while the ring that was on that hand disappeared. Out of instinct, Harmony swung the sword as the birds, killing a few of the birds. A blinding light came from Luka and once again, Harmony swung her sword and killed off a few of the birds. This was the funnest thing Harmony had ever done, swing a sword to kill weird looking birds. The birds, having common sense, didn't want to all die at the hands of a partly blind girl and a nymph, so they flew off to return when Harmony was at home, where her dad, knowing what they were, thanks to his understand of Greek mythology, saw them and played some heavy metal music and told Harmony to go at it, and kill all the birds, which she did.

Harmony still didn't believe her mother's letter until Luka told Bruce that she was a nymph and thought she should try to convince Harmony her mother was a Greek titan. Luka trying to convince Harmony was not the best idea because well, Harmony got mad and made both Bruce and Luka see that Harmony was there when she wasn't and ran out of the house. Being dark, Harmony didn't bother taking her glasses and when she ran into her normal bully again, he resulted in just hurting her. This didn't sit well with Bruce when Harmony came home and had bruises all over her but Luka got to the bully first and let's just say the bully didn't mess with Harmony again. Luka once again tried to convince Harmony that she was a demititan and she finally believed. When Bruce found out Lisa and his nephew, Bowen, had died, he went back to Australia for their funeral, and when Harmony asked how did Bruce know them, he just said she was an old friend

Over the next few years, Harmony with the help of Luka, fought off every monster that tried to challenge Harmony every year. Bruce soon thought his daughter was grown up when she turned 17 and called his only living sister, to get her son to take Harmony to camp. James on the other hand had plans of his own when his mum called up to make him take Harmony to camp. He visited them once, Bruce telling him who Harmony's mother was, before he went back to camp for a while, finding out if Harmony could stay at camp, only finding out there was a place near camp that let children with Titan parents that weren't normally allowed in camp. He traveled back to D.C and took Harmony to Camp first to pick up something for her, a knife he had found on his travels, and let her met Bowen, before he went to where this other place, The Spire, was meant to be. Not wanting to mess with the demititans, James left Harmony to join them.

With her condition, Harmony hates going outside during the day, even when she has her glasses on. She hates anything to do with going outside, only doing it if she has to. Unlike her cousin, Bowen, Harmony isn't very smart with anything and is very gullible. People aren't Harmony's strong suit, normally making them feel like she normally does without her glasses on when she finds that the conversation is going to long or she starts getting nervous When it comes to people teasing her and others about, Harmony absolutely hates it. 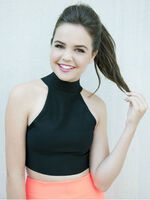 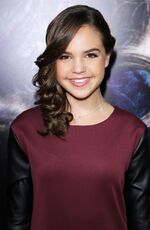 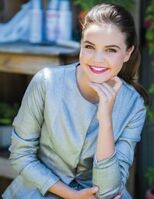 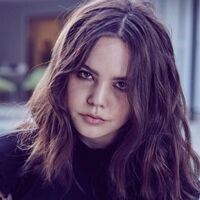 3 Months After Character is Created

6 Months After Character is Created

9 Months After Character is Created

Retrieved from "https://camphalfbloodroleplay.fandom.com/wiki/Harmony_Spall?oldid=1741517"
Community content is available under CC-BY-SA unless otherwise noted.