Like his species, Harrison is rather morbid. Things such as death, fading or a general stopping of existence don't bother him and he's known to just blurt our facts about the Underworld that many can go without knowing. He has an innate knowledge of the Korean War and is perhaps the best source of knowledge for it. Any question asked concerning it, he could ask. Topics such as Zainichi Koreans and, to an extent, Korea's annexation by Japan, are also topics he's somewhat proficient in knowledge.

For the most part, though, Harrison is fairly ordinary and can be aptly described as being overwhelmingly boring for the mortios of such a deadly war. He's incredibly sarcastic and isn't afraid to speak the thoughts on his mind, mostly knowing whoever he offends will die someday whilst he'll live for as long as time. He seemingly only has one weakness, one thing that makes him act giddy and excitable, cheerful and optimistic and that's his soulmate, Micah. Around the former demigod, Harrison can't help but do a three-sixty on his personality and he's unashamed of it. After all, they're gonna be together for the rest of time so he's allowed to be excited about that.

With The Korean War dividing families in half, breaking up relationships and resulting in worldwide tensions that remain unresolved to this day, it was no wonder that it was among the highest candidates to receive a death spirit to commemorate it - to symbolise it forever in a walking form. And Harrison, or Jaeyong as he was originally called, was just that. Modelled after an ultimately unidentifiable North Korean soldier, Jaeyong was created by the underworld gods and was, and would always be, an anomaly when it came to death spirits.

You see, because the event he was created from had (and continue to have) disastrous effects on the world, Jaeyong was called to Olympus to attend to Zeus, primarily serving him as the knowledge of the matter. There he worked in conjunction with Athena and Mnemosyne, working theorising how things would play out and the like. On Olympus he assumed the name Harrison - something easier to go by and it separated him from his origins slightly. It was on Olympus that he'd meet Jae-Ho, or Micah, a fallen soldier from the very thing he was created to commemorate. To say that was a cock-block is an understatement and Harrison always felt a pining sensation as he wanted to interact with the other more, despite the his cold demeanour.

Micah always did his best to ignore Harrison, much to Harrison's despair, and it wasn't easy considering it seemed everywhere he looked the handsome embodiment of his death always seemed to be there. To make things worse Apollo was always making advancements on him despite constantly being shut down throughout the decades. By the time the 90's rolled around Micah had had enough of Apollo's advancements and asked Zeus if he could do something to make him stop, with a promise to see what he could do, Micah went about his day as a servant.

Apollo caught wind of Micah going behind his back and was furious. Requesting the help of Aphrodite to punish his servant and failed lover, Apollo vowed to get his revenge. That night at one of the many festivals on Olympus, Aphrodite cursed Micah to feel a romantic and sexual attraction to Harrison, the mortios that was created from the mass death of the Korean War. To go even further, she got her son Eros to have Psyche curse Micah's heart so whenever he was with Harrison he would feel the exact same way he did when he was shot in the heart during the war. The latter of the two taking effect after they bonded. Harrison was unaware of either curse, continuing to pine for Micah from afar and acting like a giddy, shy schoolgirl whenever they had any interactions - much to his (and the gods around him) surprise.

That night at the festival Micah couldn't control himself when he approached Harrison, who was lounging about and not really enjoying himself. The mortios thought the interaction was going to be like any other moment the two shared, Micah acting cold and showing clear disdain for him and his entire being. But much to Harrison's surprise Micah was flirty, beyond his own control however. It wasn't long until Apollo looked over and saw Micah with his tongue in Harrison's mouth as the pair made out in the corner of the banquet hall.

After a night of fun, Micah woke up in his bed with Harrison and it was then that Psyche's heart ache curse took effect. Micah woke up with an indescribable pain in his chest, it was making it hard to breathe due to the panic that was brought on by the pain. The panic was what woke Harrison up and he was unable to help, in fact whenever Harrison touched Micah it seemed to make it worse. After a few minutes, Micah fell into an unconscious state.

Harrison was always attracted to Micah, so the idea of finally getting to be with him and then instantly losing him due to something he couldn't help was not something he wanted to happen. Seeing as Micah was created by Apollo, Harrison went to Apollo first to see if Micah's creator knew anything about what was going on. Apollo was at first very spiteful towards Harrison, giving him no answers whatsoever. But that spiteful attitude is what tipped Harrison off to something more going on. Apollo finally coughed up the truth after Harrison persisted and he quickly went to Aphrodite for her aid. As Apollo already informed Harrison of the curses placed on Micah, he went to Aphrodite knowing full well that the removal of the curses could make him hate Harrison again, but it was a risk he was willing to take.

When confronting Aphrodite, she mentioned to Harrison that all she did was make Micah attracted to Harrison, everything he did the night before was still on his own accord and it was just a more heightened feeling of what Micah already felt for Harrison. Seeing as Aphrodite is the goddess of love, it didn't go unnoticed and she made a compromise. Aphrodite agreed that if Micah and Harrison were real they'd be willing to put up with the suffering, with that in mind Aphrodite removed the affection curse stating that if they were really soulmates they didn't need her help. Furthermore she would speak to Psyche to make the heart ache go away after thirty years, gradually decreasing in severity as the time went on. Once again, if they were soulmates they could get through it together.

It was then that Harrison returned to Micah, the other still in bed but conscious again. It was obvious that Harrison's presence was what caused the ache because as soon as he returned, Micah could feel it again. His breathing got heavy and the pain came back. In an attempt to calm Micah down, Harrison kissed him. It was almost ironic that the thing that was causing him great pain was also able to ease his mind and make him think of something else. From there on out Aphrodite kept Micah as her own servant, figuring the atmosphere between Micah and Apollo would be far too toxic for the two of them.

Throughout all of the 90's and the 2000's it was hard for the pair to be around each other. Micah was only able to be around Harrison for so long before he wasn't able to bare it anymore. It wasn't until the 2010's that things started looking up. By 2015 the ache was more or less a light tingle. It was noticeable after long periods of time but it was a lot easier for Micah to deal with and if he wasn't actively thinking about it, it went unnoticed.

By 2018 Micah and Harrison were both ready to leave Olympus. It was obvious that the pair weren't giving up on each other despite what Harrison's creation meant for Micah. Aphrodite was probably the biggest fan of their relationship, she found it beautiful that despite all the pain Micah felt in the early stages of their relationship that he was willing to keep going if it meant true love and happiness. So naturally when Micah asked for her blessing to leave Olympus to be with Harrison at camp and live a more free lifestyle, she couldn't deny them. And with that Aphrodite happily sent the soulmates of the Korean War to Camp Half-Blood. 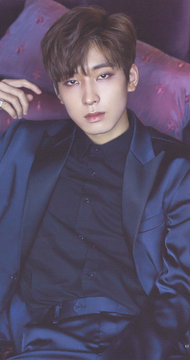