Start a Wiki
Ήβη
Hebe won the God/Goddess of the Month Poll competition for March 2013. 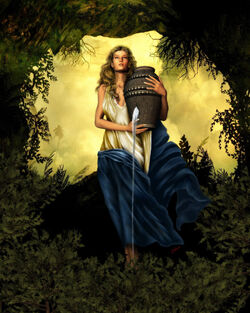 Hebe is the goddess of youth and brides (Roman equivalent, Juventas), is described as a daughter of Zeus and Hera, and is the minister of the gods, who fills their cups with nectar; she assists Hera in putting the horses to her chariot; and she bathes and dresses her brother Ares.

She was married to Heracles after his apotheosis and the mother of two sons, Alexiares and Anticetus and as a divinity who had it in her power to make persons of an advanced age young again. She was worshipped at Athens, where she had an altar in the Cynosarges, near one of Heracles. Under the name of the female Ganymedes (Ganymeda) or Dia, she was worshipped in a sacred grove at Sicyon and Phlius.

The name Hebe comes from Greek word meaning "youth" or "prime of life". Juventas likewise means "youth", as can be seen in such derivatives as juvenile. In art, Hebe is usually depicted wearing a sleeveless dress. Hebe was also worshipped as a goddess of pardons or forgiveness; freed prisoners would hang their chains in the sacred grove of her sanctuary at Phlius.

Her successor was Ganymede, the Trojan youth who was abducted by Zeus in the form of an eagle to become the cupbearer of he gods. 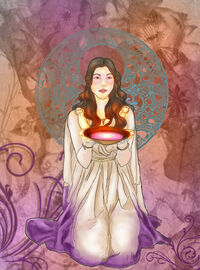 Retrieved from "https://camphalfbloodroleplay.fandom.com/wiki/Hebe?oldid=1570751"
Community content is available under CC-BY-SA unless otherwise noted.