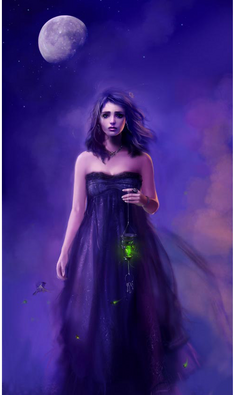 HECATE was the goddess of magic, witchcraft, the night, moon, ghosts and necromancy. She was the only child of the Titanes Perses and Asteria from whom she received her power over heaven, earth, and sea.

In Greek mythology, Hecate is the personification of Magic, Mystery and Mist. Hecate was born from the love of Perses and Asteria, and was the one of the first Titans. Though she was born a Titan when a war broke out between them and the Gods she switched sides, favouring the Gods. Because of this she was granted immense power from Zeus, Poseidon and Hades and gave her power in all three major realms (sky, sea, and the Underworld).

Hecate is a powerful goddess representing the aspects of the Triple Goddess: goddess of fertility and plenty; goddess of the moon; and goddess of the night and the underworld, which led to her evolving as the patroness of magic and Witchcraft. She mixed fertility with death to be used as earth power. She has been called supreme, both in heaven and hell. It is believed that even Zeus called on her whenever he wished to grant something to someone. Hecate is portrayed as the most powerful - who could give aplenty or destroy totally. She is said to have the power to bestow on or withhold from mortals any gifts she chose. All the secret powers of Nature were at her command. She had control over birth, life, and death. Because of her power in the three areas of nature, heaven and earth she was represented as a triple form.

She is most known as an underworld goddess; the Goddess of the Dark of the Moon, the nights that there is no moon and the world above is as dark as the world below. She was the overseer of the world of the dead. At night she travelled roaming the earth accompanied by her dogs, Hermes, and dead souls. Some say she sent demons from the lower world at night and that she causes nightmares and insanity, and was called "the Nameless One."

Hecate in Greek means 'the desire to understand'. Because of her power Hecate had many worshippers and cults around Ancient Greece and Rome. She had many priests who worshiped in her name, all her followers worshiped at night in light of a new moon and would be gifted in the arts of magic. She nhad cults in many cities; Athens Sikyonia Sphesos and one in Sicily, Italy. Small household shrines were erected to Hekate to ward of the harmful influences of witchcraft and the power of the evil eye. And shrines were also built at crossroads to guide travellers and merchents at night.

“They turned her into a deceitful weasel (or polecat), making her live in crannies and gave her a grotesque way of mating. She is mounted through the ears and gives birth by bringing forth her young through the throat. Hekate felt sorry for this transformation of her appearance and appointed her a sacred servant of herself.” ~Antoninus Liberalis, Metamorphoses 29

Hecate was looked upon as a goddess of fertility, whose torch was carried over freshly sown fields to symbolize the fertilizing power of moonlight. In women's agricultural mysteries her trinity took form as Kore the green corn, Persephone the ripe ear, and Hecate the harvested corn. She is closely associated as a Goddess of Midwives and pregnant women. Hecate is described by Hellenic as being in the houses of women in childbirth. Since she is a Goddess of the underworld which deals with life and death it little wonder that she was petitioned for help by women having difficulty in child bearing.

A lover of solitude, Hecate's true nature is very much unknown. She spends a great deal of time in the Underworld, being a close friend of Hades and Persephone especially. She apparently resented not being honored by the demigods since she supported Kronos in the Second Titan War. Since her children have been given their own place at Camp Half-Blood, she has given up her grudge against Olympus, but seems protective and worrisome of her children, many of whom were lost, captured, or embittered by the experience of the second Titanomachy.

Hecate is usually dressed in dark robes, holding twin torches (all the better to see you and burn you with, my dear). She is accompanied by a she-dog and a polecat, which used to be her enemies before she morphed them into animals. In later times, Hecate was pictured as a woman with three heads, or three entirely different forms for morning, noon and night. She is also sometimes described as being dressed in white robes with ornate silver designs, like runes or alchemy symbols. Her dark hair barely comes down to her shoulders. There is a green shimmer that surrounds her like an aura. Her face is like a Greek statue- pale, beautiful, and ageless.

She possesses the standard powers of a goddess.

Retrieved from "https://camphalfbloodroleplay.fandom.com/wiki/Hecate?oldid=1524565"
Community content is available under CC-BY-SA unless otherwise noted.