Start a Wiki
Ήφαιστος
Hephaestus won the God/Goddess of the Month Poll competition for June 2013. 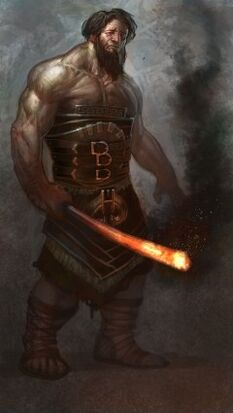 Vital Statistics
Family
Scopes/Patron of
Other

HEPHAESTUS was the great Olympian god of fire, metalworking, stonemasonry and the art of sculpture. He was usually depicted as a bearded man holding hammer and tongs--the tools of a smith--and riding a donkey.

In Greek mythology, Hephaestus is the god of forges, fire and blacksmiths. Haphaestus was born directly from Hera, and is one of the Twelve Olympians. He was married to Aphrodite.

Due to Zeus' giving birth to Athena, Hera was angry at his actions. She then gave birth to Hephaestus. He was an ugly and deformed child. A rumor was spread by Hera that Zeus threw him from Mt. Olympus at birth due to his ugliness, when it was really Hera herself. Another story makes the claim that Hephaestus stepped in between his mother and father's argument and sided with Hera. In rage of his son's actions, Zeus seized Hephaestus by the legs and threw him from the top of Mt. Olympus, which caused his drastic injuries. After being nursed to health, Zeus (in a rare act) apologized and welcomed his son back with open arms.

Hephaestus is the Greek word for fire. This god had many cults around Ancient Greece and Rome. Hephaestus had many priests who worshiped in his name, usually paryed to before battle so that their swords and weapons would be strong in battle.

In Roman mythology Vulcan is the god of fire. As Vulcan, he becomes more disciplined, warlike, and militaristic. The Greeks envisioned Hephaestus as a benevolent and clever being. To the Romans, Vulcan was the god of volcanoes (which were named after him), giving him greater power than his Greek aspect. 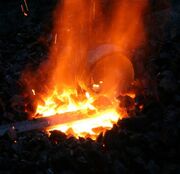 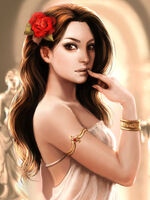 The goddess of love, Aphrodite, was causing a lot of problems in Olympus due to her radiant beauty. Zeus decided to wed her to Hephaestus to keep her off the market, though she still had multiple affairs with Ares,the god of War. Though these days the affair is considered old news and every one just accepts it but Hephaestus still tries to find ways to publicly embarrass his wife and her lover in front of the other gods with elaborate traps and tricks. The most famous one and the first one was when he caught the two lovers in a magical net and then invited the other gods to come and laugh at the unfortunate sight.

He also took part in creating the metal giant Talos, the Trojan Horse, and other various automatons.

Hephaestus tends to be gruff, and disappointed in life, in people and other "living organisms." He loves his wife Aphrodite, however he is sad and angry at her unfaithfulness. He is very bitter and hateful towards his "perfectionist" mother, Hera, and even once tricked her into sitting on a throne with hidden unbreakable chains. Hephaestus' tendency to bear grudges (namely against his mother) for a very long time make him similar to Hades. However, as shown in Percy Jackson's Greek Gods, Hephaestus is shown to have at least some love for his mother, and could not bear to see her chained over the Void of Chaos, and he finally rescues her. Hephaestus is somewhat bitter about his life, and puts his faith in machines rather than people, as machines "can't let you down." However, he appears to have a soft spot for Cyclopes like Tyson, and seems to be on very good terms with his half-sister Athena, while they both mutually despise Ares. He is also very good friends with Dionysus, who was the only one able to convince Hephaestus to unchain his mother Hera. Hephaestus also greatly admired Daedalus, above all other mortal men. Despite his bitterness, Hephaestus is the lover of many things, such as his unfaithful wife, Aphrodite, his many demigod children (especially Leo) and their mothers. He also pays Calypso friendly visits from time to time. However, there is also a darker side to Hephaestus, shown in Percy Jackson's Greek Gods, when he gives Harmonia (the daughter of Aphrodite and Ares) a necklace with a horrible curse.

He is a huge and ugly lump of a man with his shoulders at different heights (so that he always seems to be leaning) and a huge, bulging, misshapen head and his leg in a creaking steel brace, with a wild brown beard that sparks fire from time to time. He is the only Olympian to show such extreme physical injuries; however, he is also very muscular from working in his forges. According to Leo, Hephaestus' face is red, lumpy and covered with welts, "as if he’d been bitten by a million bees, and then dragged across gravel." Inside his workshop, he wears a jumpsuit smeared with grime and oil with the name Hephaestus embroidered over the chest pocket. When he is on Olympus, however, he is much cleaner and elegant. In The Battle of the Labyrinth, Percy says "I guess he'd cleaned up when I saw him on Olympus or used magic to make his form seem a little less hideous." According to Percy, Hephaestus' voice is deep, booming, and rumbly. Hephaestus is also said to wear a "permanent scowl". According to Leo, Hephaestus' laugh is so loud, that it makes his tools rattle of their workbenches. In Percy Jackson's Greek Gods, it is revealed that Hephaestus is extremely hairy, and had to shave multiple times a day, even as a child. 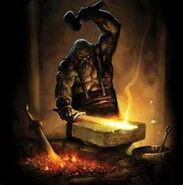 Add a photo to this gallery
Abilities

As a son of Zeus, Hephaestus is an extremely powerful god.

Retrieved from "https://camphalfbloodroleplay.fandom.com/wiki/Hephaestus?oldid=1570146"
Community content is available under CC-BY-SA unless otherwise noted.