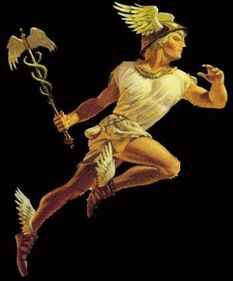 HERMES was the great Olympian God of animal husbandry, roads, travel, hospitality, heralds, diplomacy, trade, thievery, language, writing, persuasion, cunning wiles, athletic contests, gymnasiums, astronomy, and astrology. He was also the personal agent and herald of Zeus, the king of the gods. Hermes was depicted as either a handsome and athletic, beardless youth, or as an older bearded man. His attributes included the herald's wand or kerykeion (Latin caduceus), winged boots, and sometimes a winged travellers cap and chlamys cloak.

Hermes was born sometime after the first Titan War to Zeus and a Titaness named Maia. He matured rapidly and within a few minutes of his birth stole the cattle of Apollo and invented the lyre. He even thought of a clever way to cover up his crime: tying bundles of grass to the cows' feet and leading them backward out of the pasture to make it look like something had been led into the pasture, but not away from it.

Despite this, Apollo found out and went to Zeus for justice. When brought before his father, Hermes attempted to charm Zeus into letting him go by telling him he was just an innocent new born baby. Undeceived, but amused by the child's boldness, Zeus instead forced him to compensate Apollo, which Hermes did by presenting him with the lyre. Hermes also traded the shepherd's pipe (another invention of his) to Apollo in exchange for his golden staff and knowledge of the art of prophecy. When he came of age, Hermes was made the messenger of the gods.

As the messenger of gods Hermes would often serve as the intermediary between the gods and the mortal world. He aided Odysseus against Circe and told Calypso to either let him go or face the wrath of Zeus. During the Trojan War he sided with the Trojans and delivered Zeus' order to return Hector's body to his father. Also in the Trojan War, Hermes and Apollo teamed up to help guide the arrow that killed Achilles, and Hermes helped Helen escape with the rest of the citizens of Troy when they were over run by the Greek armies.

In other stories, Hermes gave a pair of his winged sandals to Perseus when Perseus went to behead Medusa. In some tales, he freed Zeus after the latter was initially defeated by Typhon and freed Ares from his imprisonment by the Alodai among numerous other feats.

Hecate in Greek means 'the desire to understand'. Because of her power Hecate had many worshippers and cults around Ancient Greece and Rome. She had many priests who worshiped in her name, all her followers worshiped at night in light of a new moon and would be gifted in the arts of magic. She nhad cults in many cities; Athens Sikyonia Sphesos and one in Sicily, Italy. Small household shrines were erected to Hekate to ward of the harmful influences of witchcraft and the power of the evil eye. And shrines were also built at crossroads to guide travellers and merchents at night. 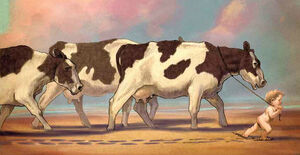 Though he was laid out in swaddling-clothes with her winnowing-basket for a cradle, he escaped and made his way to Pieria, where he stole some cattle that Apollon was tending. To keep from being discovered by the tracks, he put boots on their feet and led them to Pylos. He hid them in a grotto, except for two which he sacrificed, pinning up their hides on rocks, boiling some of the meat for his meal and burning the rest.

Outside the cave he found a tortoise feeding. He cleaned it out, and stretched across the shell strings made from the cattle he had sacrificed, and when he had thus devised a lyre he also invented a plectrum.

In contrast to many of the other Olympians, Hermes is much more reasonable and helpful than the other major Olympian gods with a greater understanding of mortals. Hermes is not prone to the overt arrogance of some like Zeus or Ares, nor the character quirks like Apollo or Aphrodite. Part of this may be due to part of his job being to help mortals rationalize divine events giving him a greater understanding of things beyond himself. Sometimes, Hermes helps people to understand the things that covered with the Mist. He is shown to care a great deal for his children (especially Luke) and to be far more accepting of others. Both traits are not common among the other major Olympians. Hermes' visits are often beneficial to gods and demigods alike, and often help them out, though this is frequently at the request of another god or personal motivations. Hermes tends to be one of the more clever and cunning Olympians, as he tricked Argus into falling asleep and even outsmarted Apollo when he was a child. Since another one of Hermes' jobs is to guide the souls of the deceased into the Underworld, he is one of the few Olympians to be on good terms with Hades.

However, Hermes can become very angry when crossed, or especially if someone implies that he does not care about his children. Nonetheless, Hermes takes his duties as a god very seriously, rather unlike Apollo and Dionysus, who take their duties and responsibilities in a much lighter manner. As a result, Hermes will not breach his divine duties, even to save his own children, since not even he can defy the Fates, as attempting to do so would only make matters worse. All in all, Hermes is by far one of the more reasonable and beneficial Olympians.

He is described as appearing to resemble a middle-aged man with an athletic figure-slim and fit with salt-and-pepper hair, as a jogger and in his original form has a muscular build, curly black hair, blue eyes, elfish features, and a sly grin. He has been known to wear nylon running shorts and New York City Marathon T-shirt while jogging, an outfit similar to a mailman's when delivering mail with a pith helmet which sprout wings, and a suit. He carries a cell phone which turns into a caduceus. He has been known to sport winged shoes, as said in the books. When Hermes is furious, he has a furrowed brow, his eyes get steely cold, and his facial expression hardens like he'd "turned into marble."

She possesses the standard powers of a goddess. As a son of Zeus, Hermes is a very powerful god.

Retrieved from "https://camphalfbloodroleplay.fandom.com/wiki/Hermes?oldid=1569422"
Community content is available under CC-BY-SA unless otherwise noted.