Start a Wiki
Ὑπερίων
This page is only informational and is to be treated as such. Please do not make any roleplays on this page. 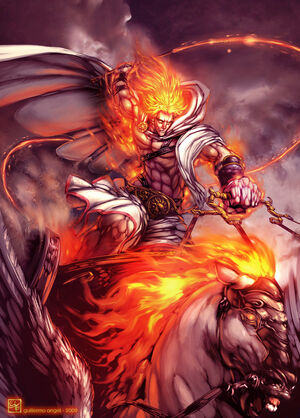 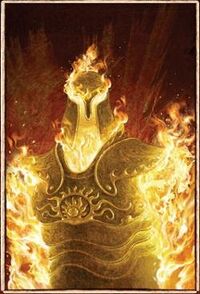 Hyperion (Ὑπερίων in Ancient Greek) is the Titan of light and is the father of Eos, Helios, and Selene by Theia, the Titaness of sight and enlightenment. Hyperion's name means "watcher from above" or "he who goes above" from the Greek words hyper and iôn. One of the twelve original Titans, Hyperion was imprisoned in Tartarus after the Titanomachy and was eventually released during the Second Titan War to fight against Olympus. His Roman form is Sun.

Like his siblings, Hyperion was born to Gaea and Ouranos, the respective personifications of the earth and sky. When Kronos was going to dethrone his father, Hyperion was one of the four Titans that held the sky still, making sure that it wouldn't fall. The reason why he is the Lord of the East is because he was responsible for that part of the sky, hence why the sun always rises from the east. He later took his sister, Theia, as his wife and fathered the dawn, moon, and sun gods by her. Hyperion fought for Kronos in the first war against the Olympians and was cast, along with many of the Titans, into Tartarus after their defeat.

Retrieved from "https://camphalfbloodroleplay.fandom.com/wiki/Hyperion?oldid=1570210"
Community content is available under CC-BY-SA unless otherwise noted.