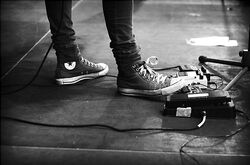 Carter Cebotari was born to a young couple in Romania in 1967, his parents had quite a lot of money, hence they spoiled Carter, making him very dependant on him. But soon the enevitable had to happen and his parents died of a unknown sickness, leaving Carter all their money and worldly possessions. Carter splurged on all kinds of things, alcohol, fast cars, holidays, but soon he began to gamble his money, and slowly lost a lot of his money. Down to his last $20 Carter bet it on a random horse, this attracted the attention of Ate, she, wanting a demigod child to order about, decided he was the perfect father for her child. She gracefully waltzed over to talk to him and soon the two of them were making out in a nearby bathroom, they kept going further and further until....well you get it.

Carter had no recollection of that night's events, all he knew was that he lost his last $20 on some horse that had a heart-attack during the race. Carter, knowing that he had no money, sold his parent's house, along with some jewellery of his mother's and left, moving to Moldova to buy a somewhat decent house there. While barely having enough money to feed and clothe himself, Carter thought it was the end of the world after Isaac turned up on his doorstep.

Carter knew if he kept the baby he wouldn't have enough money to feed himself or Isaac, but after debating about it he eventually decided to keep Isaac. Of course soon enough Carter was totally broke again. Carter was soon forced to move out of his home and live on the streets. Carter's first priority was to look after Isaac, who was only 4 at the time. Carter was lying on the streets one day when a young woman walked past. She looked at him with her green eyes and dropped some money onto his lap.

Carter weirdly fell in love with the girl and tried to find her again. One day he saw her walking out of the bakery and smiled at him. She walked over and gave him some more money but this time she didn't leave. They talked for a while, on the street while five year old Isaac slept in the back alley, Carter not wanting people to know he had a young boy with him as he might get took away.

Soon the girl Carter had fell in love with, her name was Clara-bell, asked him to move in with her as, of course, he had nowhere to stay. Carter hastily agreed and decided to tell her about Isaac.

Clara-bell liked Isaac from the start, but Isaac, not so much. Isaac despised the woman since she first lay hands on his father. The only reason he agreed to go with his father, was because they would have a place to live and he loved his father too much to let him leave him.

Soon, Isaac was forced to go to school, he hated it, he was bullied for his scrawniness and his height, being 5'1" while most of the class were a lot shorter. Though Isaac preferred school to the hellhole of a house that he lived in.

Isaac met a girl one day, on his 10th birthday, she introduced herself as Blaire and from that day on, Isaac had a somewhat big crush on her. It took Isaac three years to ask her out, Blaire accepted very abruptly, shocking Isaac quite a lot.

Isaac and Blaire walked around a small park in the middle of town, they were about to kiss when suddenly an empousa attacked them. Blaire screamed as the empousa attacked her first, Isaac tried to save her but she told him to run.

Isaac regretted running as soon as he left the park, but knew he couldn’t stop. He managed to reach his house or Clara-bell’s house as it was only to hear more bad news….Clara-bell and Carter were getting married.

Isaac ran into his room locked the door and rocked in the corner of his room. He never hardly walked out of his room only to eat and go to school. While in his room Isaac found a love for music and art. Making art was the only way to keep himself from getting too depressed.

One day when Isaac was 15 a young woman started talking to his father, and weirdly a couple of weeks later Carter broke up with Clara-bell, leaving her devastated and she kicked him out of the house, but the woman gave him enough money to stay in a hotel for a while until he got a job. Soon Carter went insane with paranoia, this shocked Isaac slightly but he was too stupid...(or too clever) to realize it was the woman's fault.

Though one night, Carter was talking to the woman and she told him, in a quite suducing voice, to come up to the roof. Before he knew it police sirens were blaring outside and they surrounded the dead body of his father, shocked Isaac ran up to his room and locked himself in only to be charm speaked out by the woman.

The woman introduced herself as Belladona and said that his mother (Ate) had caused his father to go insane. She that convinced him to join her group and swear an oath on the river Styx.

Bella hated the gods, hated everything about them, and she was determined to be one demigod that never went to that stupid Camp Half-Blood. She knew it wold not always be easy, fighting monsters alone, so she kept an eye out, for like-minded demigods like herself, maybe even demigods that were abused, mistreated or abandoned. Over the course of three years, she went out in search of demigods like herself, and convinced them to join her, that they were safer in numbers. One day, the three years she had spent successfully recruiting began crumbling into nothing within seconds. She went to collect a daughter of Hades, and had already started to set the house on fire. She thought it would be easy, just like when she recruited Leo, but things went horribly wrong. Turns out there were a group of Satyr in the area, who had been scouting for demigods. They had tracked down the hades child’s scent, and bust in right as Belladonna was lighting the fire outside the parent’s room. They came at her, trying to catch her, so she swung around the torch she was using to start the fire, hoping to keep them from grabbing her. The swinging of the torch caused it to strike a set of curtains, which then caught up in flame, and Bella watched in horror as the flames spread rapidly around the hallway and through the house. She ran outside, but realized that her plans were ruined. They had seen her, they knew who she was, and they knew what she wanted. She ran away from the burning house as the satyrs scrambled to get the child and parents out. She went back to their townhouse and told her followers that they would not be recruiting any more demigods for a while. That they needed to be careful, that people were on to them, that they were not safe.

One day, one of her satyr informants told her about the BC, about their factions and beliefs. She saw a chance for safety and a chance for her to gain more control in the Opus Superum, who like her and her minions thought that demigods were superior. So that night they set off for the BC, and spent many months in search for it, before finding the Sanctuary.

Not all the demigods with her felt that it was the right move, they were starting to feel differently about all of it, and decided to head for camp instead.

Isaac or Total as he now likes to be known, has a trouble with trusting people and occasionally with actually speaking to people in general. However while his father was quite an ambitious man, Total didn't inherit this trait, and as such is quite content with his present situation. He's very cowardly and neurotic, having a fear of quite a lot of things but he's also quite clever and sly, usually being compared to a fox, as he is also quite agile too. Total kinda stopped believing in love after his girlfriend, Blaire, died. He likes to take risks and is quite reckless as well. Issac got the nickname Total as he is said to be a "Total Idiot or Dork".

Retrieved from "https://camphalfbloodroleplay.fandom.com/wiki/Isaac_%27Total%27_Cebotari?oldid=1566564"
Community content is available under CC-BY-SA unless otherwise noted.