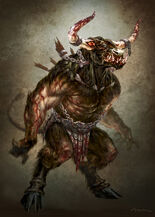 Isaiah's story of despair begins with an Erotiad named Opal. She was created from the marriage of two demigods who had met at Camp Half-Blood, and went on to become celebrities as famous singers, and had gotten married. For several years, Opal lived a happy life, that is until infidelity had found their way into the demigods' marriage. Opal began to feel faint and weak all the time, and she could feel that she was dying. Slipping into a depression, Opal went off into LA, to live out the rest of her life frivolously. While she was there, she came across the Minotaur having recently reformed from Tartarus. Initially afraid he would kill her, Opal used her powers of attraction on him. Soon after calming him down, Opal, still obsessed with living in the moment, consummated with the monster. Not long after, Opal became aware that she was with child, but was unconcerned, considering she would die soon. Unbeknownst to her, the demigod couple had made amends with one another and were never more in love. Opal the regained her strength and gave birth to Isaiah. The Minotaur, assuming that the two of them would stay together, was crushed when Opal revealed to him that she would take their child and raise him at Camp Half-blood, as it was true home.

He didn't stop her from taking Isaiah away,but soon after, he went off to Hollywood and attacked the demigod couple who'd created Opal, and brutally murdered them. Opal died on the spot, dropping the beastly child, just as she was about to reach Camp.

A satyr soon found him outside, and tried to bring him into camp, but could not, due to the child being part monster. Feeling bad for the child, the satyr took Isaiah to an orphanage in New York. Isaiah grew up in New York, not thinking anything strange about himself other than his tail, which he grew to believe to be a birth defect. He had a relatively normal childhood, aside from often running away from any home he would be adopted into. It wasn't until he was 15 that he first demonstrated his powers. An especially rude man had stepped on his foot in the street, and had stolen a taxi he was about to get into. Livid, Isiah shifted into a minotaur and flipped the cab with his horns, and tossing the man into a building. Suddenly, a kid from the street came running at him with a sword. Without thinking, he gored the kid with his horns, and slammed him body to the ground with savage force. This would be the first of many demigod children he would kill. Growing weary of being attacked on a regular basis, Isiah took off southwest. He soon found his way into the Blue mountains, and found what appeared to be some sort of fortress in the mountains. Suddenly his father appeared out of the trees and attacked his son. Just as suddenly, a Hispanic demigod ran out of the facility, tossing Isiah a huge battleaxe, and throwing several fireballs at the minotaur, who immediately burst into flames, disoriented. Isaiah, consumed with sudden rage, transformed, and sliced his father's head in half, and simply watched as he disintegrated into gold dust. The demigod introduced himself as Dante, and offered to show him around, assuming he'd get through processing.

Has an intense desire to be accepted, and is willing to go irrational lengths to be liked by others. He is angry and bitter at his parents, and has a slight disdain for most nymphs.

Since being held captive by the sea god Pontus, he has become more bitter, angry, violent, and assertivie. He has become much more authoritative and unrelenting. He has also developed an Alpha-Male mentality, and hes come into his own. 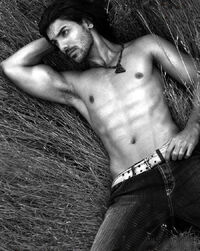 In human form, Isaiah is 6'2, 205 lbs, He is a caucasian male, has green eyes, and brown hair. He has a musular build and is described as being attractive. While being held captive by the sea god Pontus, Isaiah's hair as well as facial hair has gorwn longer,

In minotuar form, he is 9'5, 350 lbs, has light brown fur and horns, and red eyes. He is extremely muscular.

Even while in human form, Isaiah has a bull's tail

Retrieved from "https://camphalfbloodroleplay.fandom.com/wiki/Isaiah_Davis?oldid=1569691"
Community content is available under CC-BY-SA unless otherwise noted.