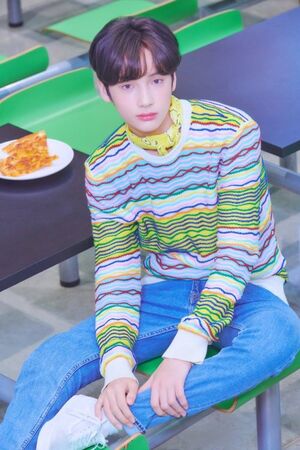 Sometimes Julien is a party animal. Other times, he's a sleep 24/7 type of person.

Julien is restless, cheerful, and friendly. He's a always on the go person, and loves to be free. No matter how dark the circumstances are, he's extremely optimistic about everything and anything, and has a lot of faith in other people. He'll easily show you the bright side of things. Very much the type of person that in a sticky situation, will be the one to say, "Hey, at least we're not in (other bad situation)."

He tends to be a dreamy person, and sometimes, not in touch with reality at all. However, he's able to put himself in other people's shoes and is very understanding. Julien is soft-hearted and sweet like sugar, and maybe relies a lot on his intuition, which sometimes gets him into trouble. But at least he's understanding, and never indifferent to your feelings, right?

Julien's dreaminess leads him to have Very Big Ideas. He is usually excited to share these ideas, and other people may doubt, but he is optimistic in achieving them, but doesn't really pay attention to details, only noticing later that maybe he should've done this or that. He's super enthusiastic and very much not boring.

Mathilde had a one night stand with this gorgeous guy at a college party. The entire dorm had to know, because she couldn't stop talking about it. All of Quebec should've known by this point, because she couldn't stop gushing over him. Love at first sight, maybe? Mathilde was determined to find out. But the handsome stranger brought up more questions that she couldn't answer. One, she had been too lost in the moment to even ask for a name. Some people swore that his name was Matthieu. Louis, maybe? Two, she didn't even know where to find him again. Mathilde couldn't even be sure that they even went to the same university. He could've been from anywhere. She tried asking around but everyone had the same answer: he was just there one moment and next the another. Okay, so handsome stranger was mysterious. Mathilde liked mysterious, she could deal with that. She's read enough detective stories and watched enough Sherlock to try to find him. But the probability of that happening was lower than the Toronto Maple Leafs winning the Stanley Cup anytime soon. And it was harder to do that when she was dealing with an unexpected pregnancy. That's right, Handsome Stranger had gotten her pregnant. Mathilde Beaulieu was twenty, alone, and totally ??? at her situation. But did she regret it? Not at all.

Julien Taeyoon Domingue was born and raised in Montreal. Mathilde was a doting mother, and a strong woman in her own right. But the life of a single mother was a hard one, and Julien had to be content with constant babysitters and the inside world of their small apartment. She felt some guilt about the constant time away from Julien, and went in over her head trying to give him the best she could. Slowly, things for the two improved. By the time Patrice came into the picture, Mathilde was proud to say that she was the mother of a four year old and she hadn't really messed up along the way. Patrice Bergeron was twenty-six, in law school, and just as bit as charming as her handsome stranger had been years earlier. As quick as her earlier love was, this love for Patrice was slower. Julien was seven when they finally eloped.

By demigod standards, Julien was lucky that most of his childhood went without any overt signs of his godly parentage. That's what he says, looking back at it. In reality, the signs were always there. Mathilde was a normal person and although she had joking referred to her one night stand as a God, she never once thought that "Gee, maybe Handsome Stranger really was a God?". To Julien, his father was simply a handsome stranger that disappeared. His relationship with his mother and stepfather was close enough that he let him stay the handsome stranger. Julien continued on with his life, getting various hobbies, welcoming some half-siblings, and ignoring the strange people that would stalk him in his middle school hockey games.

8th grade proved to be a turning point in his life. As if middle school couldn't be enough, Julien was suddenly thrown with the information of who his father was. He was waiting to get picked up by his mother after a hockey game, when suddenly he was attacked by a hellhound. Julien, being a demigod ignorant of his parentage, didn't know what to do other than pick up a nearby stick and try and shoo the large dog away. It was only big because he was tired, right? A flurry of arrows lead to the destruction of it before his very eyes. A nearby satyr quickly came to his rescue and ended up explaining to the shocked teenager that yes, he was indeed the son of a God. Wow, as if. Julien was thankful for the help, but no thanks, dude. Julien didn't believe any of the whole Greek world stuff, and he wasn't really in the mood to join a cult. Even as a thirteen year old, he knew better than to follow some complete stranger into the wilderness of Quebec. That is, more monster attacks kept happening after the first one. What Julien thought was some one-time dream became fairly frequent attacks that usually ended with the same satyr coming and saving him. In time, he began to realize that this wasn't some weird lucid nightmare - it was real life. Now as a fifteen year old, he has come to Camp Half-Blood. He's only been here a few days, but he's quickly learning about everything Greek that he has pushes away before.

Powers of a Child of Apollo

Retrieved from "https://camphalfbloodroleplay.fandom.com/wiki/Julien_Domingue?oldid=1795293"
Community content is available under CC-BY-SA unless otherwise noted.