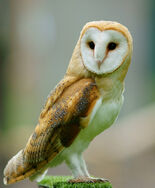 History= As Justin had just arrived at camp, Justin really missed his dad and wanted a close friend that can be like a relative to him, someone he could talk to anytime. He wished his mother would be there, but that is impossible. Seeing Justin so sad and decided to give him a welcome-to-camp gift, Athena created an owl and named him Glanos. Then, she commanded the owl to fly to Justin at camp. He was just walking in the forest when Glanos arrived at camp and landed on his hand. In his leg had a little message: "My gift to you, my son. It'll be your close friend and help you when you need. Take good care of it. Farewell, Justin". He loved Glanos a lot and put him in a cage next to his bed in Athena's Cabin.

He had an empathy link with Justin, allows Justin to feel Glanos' feelings and know where he is, and Justin can also talk and command Glanos, since he's the son of Athena.

Retrieved from "https://camphalfbloodroleplay.fandom.com/wiki/Justin_Mirase/Pets?oldid=1554223"
Community content is available under CC-BY-SA unless otherwise noted.