This character belongs to EvilhariboMadness

Kayden is half awkward, half confident. Mostly he speaks quietly, in hopes that if no one can hear him, he won't be questioned. At other times, he's loud and confident about himself, always claiming to be awesome at everything, even when he doesn't know said thing he's saying he's awesome at. On top of being shy and confident, he's also flirty, which often lands him into trouble.

Lorcan Darnell was an average Londoner, never straying away from his life of being unsocial, yet singing all the time at home. One night, his mother, Elizabeth, died, and soon after, he was attending her funeral. There, he met a girl who said her name was Meggy. The two started talking, and before long, they began to date.

Once they were dating, Melinoe never kept her secret from Lorcan, and Lorcan prided himself about going out with a goddess. After a while, Melinoe got bored, and decided to have a quick one night fling with Lorcan. Before long, she left, leaving a depressed Lorcan behind.

Lorcan then decided to pursue his dream of singing, just singing in local pubs and bars. After nine months of living his new life, he got a call, telling him to meet at this place. He went there, and was handed a baby boy by Melinoe. She told him that this was their son, and that he was a demigod, and would be the subject of many attacks. Lorcan took him home, and named his son Kayden.

Raising an infant son was tough for Lorcan, as he didn't know how to sustain his lifestyle. Soon he tried internet dating, and met a woman named Elise, in who he had fallen head over heels for. By the time Kayden was 5, his father was married. Lorcan and Elise had one daughter together, a little girl called Reese. Kayden doted on Reese, and protected her hugely. Growing up, Reese was always with her mother, learning about being a nurse, whereas Kayden was taught how to sing like his Dad. This developed Kayden's love for music, and caring about his appearance.

When he was 12, Kayden was attacked by a Sphinx in his garden. The Sphinx asked a riddle, and being 12, and not having any intrest in riddles, unlike his father, answered it wrong, causing it to attack. His father rushed out, and helped him defeat the monster. After a few tries, Lorcan managed to make the beast flee by waving a pitchfork at it. Lorcan himself could see through the mist, another thing that he prided himself on, and since having Kayden, and learning that he'd have attacks, Lorcan took up self defence lessons, in hopes that when the attack came, he could protect his son. After the attack, Lorcan sent Kayden to a boarding school down in Somerset. There, Kayden had a lot of fun; joining a singing group, and generally excelling in all of his subjects. He made friends with Jordan, a satyr, who protected him during a few monster attacks. When he was 16, he was then transferred to a boarding school in California, in his father's hopes that he'd be safe from monsters. Upon arriving at the boarding school, he saw a woman who seemed to have sharper teeth than a normal person would have.

For the first few months, Kayden was bullied for being the new kid, and for being one of the few British kids there. Mostly, he was bullied for being openly gay. He began to take an intrest in body building, and before long, he was exercising at least three times a week. His love for music never died out; instead it grew stronger and stronger. It wasn't before long that he heard that a group, founded by Skylar and Mitchell Thanes were looking for auditions. Despite the words of his room mate, advising him not to, he went ahead and auditioned anyway with Jason Derulo's In My Head.

When Mitchell and Skylar had to pick members for the group, they held auditions, expecting no one to sign up, they went to the music room and waited, no one came. They waited for an hour, and no one came. They began to pack their things but when they finished over thirty people came in hoping to earn a spot on the team. At first things appeared to be going down hill. Nobody good was auditioning. Until one girl named Amore Lewis stepped on to stage, after her, the great voices began to follow, with amazing singers like himself, Amore Lewis, Breanna Spicer, Halia Rhodes, Casper Hughes, Eli Beau, Tracey Marvell, and Lisa Flagg, the group was certain they would win.

They practised every day, and soon they perfected a routine. One late night well Mitchell and Skylar were deciding what the groups outfit would be, Skylar got a phone call, when she left to take the call, the group began filing in and helped Mitchell with the decision. When Skylar returned she looked stunned, she swiftly gave him her spot as co-leader. No one knew why, but as soon as it happened, they began to practise their routine again. Mitchell knew something was wrong with his sister, but didn't want to ask right away. They began to sing their arrangment of I Cry/Heart Attack/and Die Young. After the practise, everyone left the the room, when getting to the lounge, the group heard a small slam in a nearby closet. When Mitchell went to open the door, he was soon knocked out when the door slammed open and knocked him to the ground, Skylar being worried ran to her brothers aid. When she got there two large cyclops stepped out and began to smash the room, trying to hit the group members with their wooden clubs. After a few minutes, laughter could be heard coming into the lounge, being mortals, the cyclopses jumped out the window and ran, not wanting the mortals to think it was just members of the school.

Upon getting to regionals 4 months later, the group easily got first place, now setting their sites on nationals, they trained night and day. Well on their way to nationals, the vehicle they were all in hit what appeared to be a dog. The car flipped violently, prooving it was more then a dog. When Skylar and Eli had managed to get out of the vehicle, they discovered what ever they hti was no longer on the road, but they could hear what sounded like a group of wolves charging towards them. When the rest of the group managed to get out of the vehicle as well, the pack of wolves sounded to be getting closer. When they realized they had no way to get to the nationals, the group of wolves had now reached the group of teens. But these weren't wolves, it turned out to be hellhounds, and the group had no wepaons to help them in the challenge they soon had to face. Kayden, Amore, and Halia managed to get up in a tree for safety. While Breanna, Eli, Skylar, and Tracey managed to find safety in the ruined vehicle. Leaving Mitchell, Casper and Lisa out in the open with no where to go. The group of hellhounds continued to get closer to the three unhidden teens. When a group of young females charged from the woods and killed most of the hellhounds.

The young ladies deemed themselves as the Huntresses' of Artemis. They agreed to take the teens to what they only told them was a safe place, and when the got there, all three of them managed to read the sign, Camp Half-Blood. The huntresses then knew that the teens were all demigods. Just when the group was about to enter the gates and the huntresses had all left, a hellhound pounced onto Skylar, knocking her unconcious. Halia, worried for her friends safety, called the hellhound and began trying to divert his attention, the hellhound bounded towards her and she motioned for the rest to run into the camp. They heard muffled screams followed by the sounds of a dog wimper. Mnemosyne, was watching her daughter Halia's bravery, and saved her turning her into a memory nymph. When Halia walked into the camp, she witnessed the rest of her friends get claimed by the gods of Olympus. 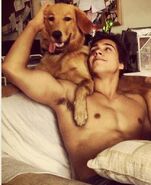 Add a photo to this gallery
Retrieved from "https://camphalfbloodroleplay.fandom.com/wiki/Kayden_Darnell?oldid=897547"
Community content is available under CC-BY-SA unless otherwise noted.