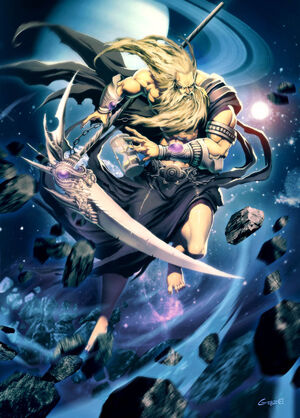 Kronos (Κρόνος in Ancient Greek) is the Titan King. His name's pronunciation is similar (though different) to Chronos ("Time" in Ancient Greek, with which he was identified in more modern times), and he is the Titan Lord of Evil, Harvest and Destruction. Kronos is the father of Zeus, Poseidon and Hades, as well of Hestia, Demeter, Chiron and Hera.

His mother is Gaia, the Primal Goddess/Titan of Earth, his father Ouranos, the Primal God/Titan of Sky and his brother is Oceanus, Titan of the Sea/Ocean. He is most referred to as the Crooked One because he manipulates the plot and secretly twists others to his own corrupt will. His Roman counterpart is Saturn, who doesn't seem as evil as his Greek counterpart, as he was said to have taught the Romans about the ways of harvest and agriculture (though this could possibly be a lie).

It should be noted that his early life is much like Zeus', who like the aforementioned Zeus was the youngest and most powerful of his siblings, and was asked to defeat his father by his mother. Kronos was one of the Titans born to Ouranos and Gaia. But Ouranos despised the ugliness of the Cyclops and the Hekatonkheires, so he banished them to Tartarus. Gaia was enraged. She offered the title of ruler of the world to whichever of the Titans defeated him. Kronos, the youngest and the most powerful, was the only one who dared to challenge his own father using a sickle. Using this mighty weapon, he attacked and greatly injured Ouranos and gained the mantle of ruler of the world for himself.

Although Kronos swore to free his siblings from Tartarus after destroying Ouranos, he became obsessed with the power that he didn't remain true to his word. He married his sister Rhea, but not even his love for her quenched his lust for power. When the two had children, he began to fear that one of them would overthrow him as he had his own father. To stop this, he swallowed his children as they were born. It was then that Rhea began to see her husband's mad and selfish nature. Making her choice, she hid one of her children and gave a rock in a blanket to Kronos in its place. The child was raised by nymphs, and eventually grew up to become the mighty god Zeus.

Meanwhile, Prometheus created man, and from here began the so-called golden age of man. Theft was not invented. The people smiled on each other. Everyone had sweet, blissful content. However this was a lie as Kronos only used them as "appetizers and cheap entertainment" also woman weren't created yet meaning that mankind was slowly becoming extinct.

However, Zeus learned of his heritage and plotted to free his siblings in order to overthrow Kronos. His wife Metis, who decided to aid in this plan, slipped Kronos a mixture of mustard and poison, which caused him to vomit the gods he had eaten, who reunited with his siblings and planned rebellion against the lord of the Titans. With this, the Titanomachy (first Olympian war) had begun with humankind swept in with it. The war between the gods and the Titans lasted for ten years. However, the Gods claimed victory, slicing Kronos into pieces with his own sickle (scythe in the books) and casting his remains into Tartarus.

Retrieved from "https://camphalfbloodroleplay.fandom.com/wiki/Kronos?oldid=1703407"
Community content is available under CC-BY-SA unless otherwise noted.