This character belongs to Koalaaipom

The twin of Kyu Yong

Kwan is a player. he is also mature and jokes a lot and almost nevers takes anything seriously. Kwan alsorarely get mad. However, When he is mad, he would often mumble under his breath and give you 'the evil eye'.

Hyo Yong met Tyche under the alias of Megan Homes at the Harrah's casino in New Orleans, Louisiana while playing poker. They were playing against each other, but kept the game friendly, by chatting and getting to know one another. Instantly Hyo fell in love and they began dating. Six months after dating Megan, she had to leave suddenly for a “business” trip. Nine months later when Hyo was about to leave for work he found two twin boys n a basket asleep with a letter explaining who Megan really was, and who the boys would be. She had already named them Kwan and Kyu.

At a very young age (around 7) Hyo revealed to his son’s that they were demigods and who their mother was. He told them all that the note said (the trouble they’re going to go through, the abilities they will posses, where they must go when the time is right, and who they are and who their mother is) and what he found from ancient Greek mythology, They decided they wanted to be prepared for this life early on and asked their dad to for his help Their father agreed wholeheartedly. He sent them out to Japan where they were home schooled and trained in martial arts (Taekwondo, Muay Thai, Judo, Tai Chi, and Kung Fu), as well as advanced swordsmanship in a small village.

After eight years of training and preparing, a monster attack finally happened, just not how they had expected. Kwan had fallen in love with a beautiful girl who had just moved into the village. Kyu didn't trust her, and he tried to explain his uneasiness to kwan. kwan saw this as jealousy and continued his pursuit on the beautiful girl. Kwan scored a date with her and it went extremely well. By the end of the date right when Kwan was about to kiss her she revealed her true identity of being an empousa. Luckily Kyu followed his instincts and followed kwan on his date. As soon as he saw what the girl was he shot her his crossbow; luckily for him he had brought the arrows his father had given him, saying it was a gift from their mom. As soon as he fired the arrow, it’s head turned into a beautiful gold and pierced her heart, turning her to gold dust. Kwan and Kyu realized that these were the monster attacks and they were going, but then another girl moved in to their Sensei's house,and was a demigod too. Kyu didn't trust her right away, but after around a month or so he decided to trust her. She convinces them to go to camp with her and leaves for Camp .

On their flight back to America they had no problems. It wasn't until they were a few miles from camp that they were attacked by four hellhounds. They were out numbered but they had luck on their side, and a child of Athena. The girl was an extremly good fighter just like themselves, and together they had defreated the hellhounds. Right before they made it into camp a fifth hellhound attacked them and killed the girl. The killed the monster and quickly ran into camp, where they were safe 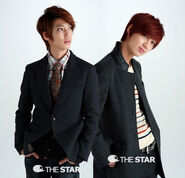 Kwan
Add a photo to this gallery
Retrieved from "https://camphalfbloodroleplay.fandom.com/wiki/Kwan_Yong?oldid=1504948"
Community content is available under CC-BY-SA unless otherwise noted.