Kyle is a very classy man. Sometimes seen as a goody-two shoes, Kyle actually is very polite and appropriate, however, when with people he truly cares for, or is very comfortable with, Kyle may even show some rebellion to this image. Since his father was a businessman and he was a solo type of guy, he taught Kyle almost everything about money and running a business. That’s why Kyle is a bit of a solo guy, too. He was left with a company at a really young age and technically he still runs it (nobody knows this, except James and he wants it to keep it that way) so he knows how to make decisions pretty quickly. Given that his father was also really self-conscious in his looks and always cared for his appearance, Kyle also adopted all of his habits (such as eyebrow plucking, almost daily shaving, and manscaping).

He is very proper in his words and manners. He isn’t touchy and enjoys having his own personal space, which might even come off as cold or blunt sometimes. Kyle has a passion for fashion and is generally open about it, loving to wear designers' when possible and discretely. He may seem like a closed guy, but he’ll probably attempt to earn someone's trust before being close to them. Kyle is very image-oriented, being always neat, groomed and hygienic. If he sets his mind to do something, he’ll probably complete it his own way, without caring about what other's might say or think.

Johannes Jäger was a succesful business man. He would as well enjoy life's pleasures, meaning he normally went to bars and such things. One night, he saw a stunning woman. It was the first time he fell in love "at first sight". He invited her a drink, and she accepted, presenting herself as Liesel (Limos).

They talked and talked, the alcohol getting to their brains until they found a small room and ended up conceiving Kyle.

When Johannes woke up, he hardly remembered what happened last night, and since he didn't see Liesel anywhere, he thought it was just a dream. However, he was proved wrong, since when he got o sleep next day. He hadd a dream where Limos explained her true nature to him, as well as Kyle's. She explained all. Kyle's dangers, how he should take care of him, and told him that she would give him the address of CHB as well as conceived weapons when the time was right.

He thought it was all a lie and/or just a weird dream, although every night he had the same exact dream. Four months later after meeting Limos, a basket was left in his front door. When he saw it, he fainted, and when he woke up, he took the basket into the house and saw what it contained: a baby boy crying, a paper slip with CHB's address and two leather wristbands, which, he gathered, were the weapons.

Being son of a very wealthy business man, I was molded at how my father wanted me to be: proper, courteous, sociable and a leader. I had no choice, since my father didn't want to hire a nanny, meaning that I always went to his work since a baby. I would'nt do tantrums, since the only time that I did one, my father made me pay dearly.

Although I loved him, I felt that he was empty. He needed something else. I felt like if I were a robot, only doing the commands that I was supposed to do. I wanted to be free. When I was 4, my father would let me go play with some neighbours.

Then, when I was 7, I won a junior swimming competition in 2nd place. I loved to swim and play in the water, and since my father needed some time alone, I would regularly go to swimming classes. Since then, ironically, my father and I started to get along. We would play once a month, which was great since before, he wouldn't even read to me a page of a book.

When I was 9, I moved from schools, and met a guy named James, who welcomed me, and from tips to advice and all that, we became best friends, and decided that whatever happened, we would be there for each other.

However, when I was 11, my father had a heart attack from being workaholic, so they took him immediately to the hospital, luckily he survived, but the medics said, that he wouldn't make it through the night. I immediately went with my father to the hospital and hugged him as best as I could. Then dad said his last sentences "Kyle, look for the things that are in the vault, you will know the code... Take care of them, they will..." the heart monitor stopped beeping, and I was left alone.

I ran to my home and went toward the vault. It was a 6 digit letter code. Dad had only said it once, but I was certain of the password. I tapped carefully on each letter. L-I-E-S-E-L. The vault opened and I found a paper slip and two wristbands, one of them with a charm. Why were these things so important? So important to count as dad's last words? I had no time to think, so I took the things and put them in my bag and ran toward the hospital, were I would be put up to foster care. And you know what?

Horrible food, horrible people, horrible bullies, and everybody hated me. I'd never been hated before. I'd never been popular either, but I was respected and like by all the people. the only thing that kept me alive was the hope of getting and sending letters to James, that way, James knew that I was in foster care. Then came the news of adoptoon. I was very happy and excited to meet my new family. When I saw them I was dumbstruck.

It was James and his mother, Katarina.

I ran toward them and hugged them. I was now 12 but had never forgot about my best friend. Never would.

Soon enough we moved to Marseille, France in pity of me, so I wouldn't remeber my father. However, James and I went to different schools, I didn't know why, but we did. In his school he met a girl named Monique, whom he liked both physically and as a friend. Then I met Diana, and something similar happened to me. We became friends, almost as James and I were.

When I was 13 and a half, I saw my first monster. It all started like this: I was walking back from my weekly karate class, and my wrists started to feel uncomfortable, as if some blunt edges were poking my skin. Then, I saw a telkhine. That's what I got from leaving near the water. Bad move, but how would've I known better? At this moment I really didn't know I was a demigod... still. The thing is: I saw the monster and shrieked, didn't know what else to do. Then, I felt as if needles were getting into my wrists, no more blunt edges. Wincing in, pain, I stripped first my left wristband (the one with a charm), and it transformed into a knife and a sword. I left the knife in the floor, and started fighting with the sword

When, it charged, it pounced on me, but I was holding the  sword toward its gut, so I fell down to the ground, but when I opened my eyes, the monster was gone. Probably I was going crazy, since my left wristband and the charm were, well, in the position before the attack again, and the knives were no where to be seen.

I decided to keep this a secret. I returned home as if nothing happened, took a shower and returned to my normal life. I actually forgot about the attack. But a year and a half later, a harpy came to remind me of it, my wristbands warning me prior to the attack. It slashed at my face with its talons, and I felt as if my face were acid, burning. Furious, I charged toward it and cut its head off, then she turned into dust.

I walked home again, but the pain in my face didn't end, when I got there, I saw myself in the mirror, the slashes were there, right in my face.

After taking a shower and cleaning thoroughly the cuts, Katarina noticed it, and I just said a wild dog had attacked me, luckily she believed me. At least, that's what I thought. However, I asked her if I could take some mental exams, hesitantly, she agreed. I was fine, nothing was wrong with me, I just was ADHD and had dyslexia, but nothing related with having hallucinations.

A year later, I fought against a fire breathing horse, and the wristbands hurt always worse than the last time. I was getting the hang of the knives. It was easier in that way, but harder in the sense that I needed to dodge fire as well. I finally killed it by stabbing it repeatedly in the stomach. Then dust took its place.

I told Katarina what was happening, maybe she knew. Surprisingly, she did. She told me I was a demigod, son of a God and a mortal.

When 16 and a half, I went for a gelato with James and suddenly 3 hellhounds came towards us. We fought as best as we could and finally killed the hellhounds. We bought the gelato and then noticed that we were both demigods. Half year later, it was James' birthday and he invited Monique, his best friend, excluding me, since, well, we were brothers. They both went outside. They felt followed, and when they turned, they saw an empousa. They fought as best as they could and then I came to help both of them and with a lot of effort, we all killed the empousa.

I ran away, but in the way I bumped into Diana, we both fell to the ground. I looked at her and then we saw some stymphalian birds. She used her bow and arrows and shot two, I could only kill one, since my sword was not that useful for killing airborn creatures.

Again, we were both demigods. We laughed and talked about our history. For years we didn't know about this from each other.

James chose to go to camp separately from Diana and me, probably to have some privacy with his new girlfriend. However, it was better for both Diana and me, we had privacy as well. We had, surprisingly, no monster attacks on the way to camp. We took a plane to new York and then a cab to Camp, with the address I had on the paper strip. We were received warmly. A new home

Powers of a Child of Limos: 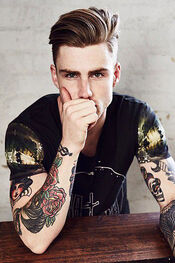 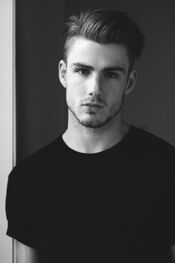 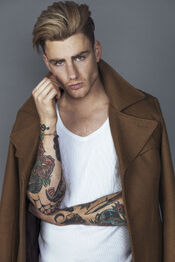 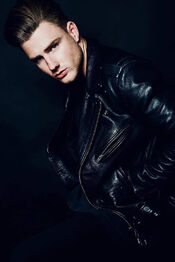 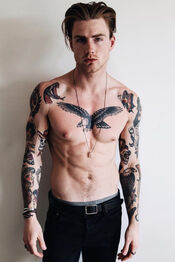 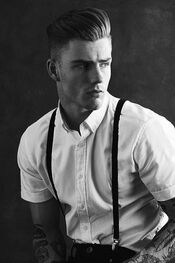 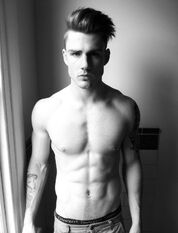 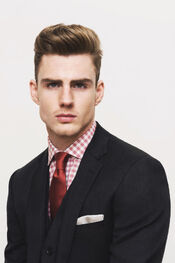 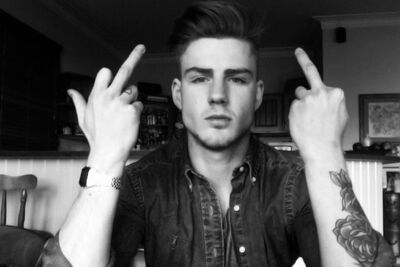 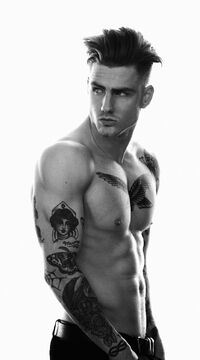 Retrieved from "https://camphalfbloodroleplay.fandom.com/wiki/Kyle_J%C3%A4ger?oldid=1802498"
Community content is available under CC-BY-SA unless otherwise noted.