Dimitri Holdender was an esteeming Russian scientist who was held in high regards by the Russian government. However he hadn't always been treated to the respect he had acquired over the years. Dimitri himself was born in 1952 to a Russian soldier and a Belarus native woman.

His father had been ashamed to call him his son and his mother had seemingly disappeared, so he was dumped into an orphanage, nameless. The nameless Dimitri endured the hardship of being unwanted for fourteen years before migrating to the USSR via hiding in the transport cars. As he entered the new nation he learnt that his father's last name had been Holdender and adopted it, naming himself Dimitri.

As he entered his early twenties he found himself an education and became well known in Moscow for his knowledge in science and by his thirtieth birthday he had become one of the USSR's best scientists. However he always hated the USSR itself and when it fell in 1991 he rejoiced and moved from the capital to Volgograd where he settled down.

As his popularity died down, the now early fifties Dimitri began to involve himself in art and often visited museums and went on excavation digs when he found the time. It was the wisdom he had acquired that attracted Athena. She admired his life story and wanted to give him something as 'well done' present effectively. She spent time learning about him to find he wanted kids, but not a relationship and so she spawned a child and delivered it to his door on 18th April 1997, a note attached explaining who she was and what the child would be. Dimitri accepted the child and named him Leon.

Living with a child proved difficult for Dimitri and he found himself becoming more distant to Leon as each day passed. As such, he used the remainder of his money to move Leon to Germany and buy a large house in the countryside and hire a few servants and maids who'd look after Leon whilst he remained in Volgograd. Leon's personal maid, Natasha Kitaev, took him in and raised him as her own son, even so much to the point where she'd hide letters from Dimitri.

When Leon was 8, Dimitri visited the house and had the intentions of selling it and to have Leon move back in with him. When she heard of this, Natasha was saddened and prepared to pack Leon's bags. It was then that she noticed a small fire had begun in the upper floors of the house, presumably caused by the small candle that Dimitri religiously lit. Instead of doing something to prevent the inevitable fire, Natasha simply packed Leon's bags and her own and claimed to Dimitri that she was taking Leon out to get drinks and sweets and other things along those lines. As soon as the house went out of sight Natasha drove straight to the airport where she used the large sum given to her monthly by Dimitri as payment to catch a plane to Toronto, Canada.

In Toronto, Natasha and Leon remained low, even much so that Leon took on the last name of Kitaev and Natasha took on his old name, Holdender to make sure they couldn't be detected initially. Leon caught on to the language quickly and he soon began attending school, being fairly popular among the other students. Athena, when realising that Dimitri was wad, was enraged at Natasha and as such she cursed her to lose gradually all knowledge, causing her to become incapable to do anything by the time Leon was 12.

When Leon reached the age of 12 years old, Natasha had became mentally incapable to do the simplest of everyday tasks which, as a result, caused Leon to become a carer. Instead of going out with his friends, he opted to stay at home and make sure Natasha was in a good state. Of course, Leon always kept this a secret at school, as to not be pitied by the teachers and students - intending to keep up his consistent school life. Eventually, however, news reached that he was and soon everyone began to baby him in a sense, making sure to be lenient towards him when he didn't do his homework or when he struggled in classes. It got to the point where Leon physically couldn't get to school due to all the overly sympathetic students and the snide remarks he often heard.

At 13, Leon had his first monster attack in the form of harpy whilst out on one of the walks he'd often do to escape Natasha and her incapability. The monster seemingly attacked out of nowhere, slashing at his legs first to floor him, rendering him slower as he had to regain his footing. In the process of standing up the harpy attacked him once more, in which he fell over, knocking his head on a rock and leaving him unconscious. He would've been dead if it weren't for a nearby satyr who had heard the harpy and decided to intervene. When Leon awoke, he was in hospital with bandages around his lower legs. A few days later he was discharged.

A year or so from his attack, Leon returned home to find Natasha in hysterics, screaming about Dimitri and how she killed him. When realising that Leon was home, she begged him to help her kill herself, suggesting an overdose of any and maybe even all the pills and tablets they had in their cabinets. Reluctant, Leon didn't budge when she asked initially, but after many fits and screams he gave in and one by one gave her boxes of pills and tablets for her to take, even adding in some alcohol to speed the process. In no less than 24 hours was Natasha dead and Leon alone. Because of Natasha's mental health, social services often visited and when they did and found her dead, Leon was instantly moved to the local foster home. Her death was credited as suicide, the possibility that Leon could've contributed was ruled out. All money Natasha had was left to Leon.

When he was 15, Leon was attacked again, this time by a hellhound. Unlike last time, Leon was prepared for it somewhat, after being told he was different and to expect unusual things. Despite the mental preparation he had done, he was floored again, similar to the previous time. However, in the current attack, there was no satyr around to save him and he ultimately died at the hands of the hellhound.

When news that Leon was in the underworld Athena went straight to Hades and attempted to bargain her son's fate with him, claiming Leon had heritage that couldn't go to waste. At first, Hades decided against it, but when Athena said she'd be willing to see him do anything he came around, stating he was only doing it due to their mutual hatred for Poseidon. His wife, Persephone's main servant was a child of Poseidon, who Hades had promised a similar thing that he had just done to Athena. The Poseidon child was relieved of their position and was discarded into the fields of Asphodel. Leon then became Persephone's main servant.

Leon remained her servants for two years and he constantly heard about how there was this camp for demigods like him. He also learnt that he was a son of Athena and that his father was great and that he too would be destined for great things. There would be many day that he and Persephone would spend talking about the Camp and ways in which he could go there. Eventually, on his 17th birthday Persephone got Aphrodite to help out and a plan was soon put into place.

Persephone created a scene in her room and called Hades to say that Leon had done it and that he had fled to the Asphodel fields to escape Hades' wrath. Persephone had strategically told him when he was under the effects of a simple love charm that Aphrodite had laid upon him, causing him to believe everything Persephone said. Soon, he was agreeing to not search for the boy, leaving him to the rest of eternity to suffer. In reality, Persephone had transported Leon to Camp via flower travel where he now resides, living in small fear that Hades will find him. 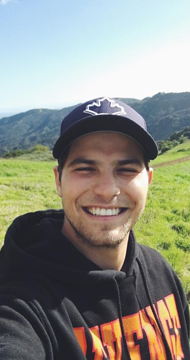 Retrieved from "https://camphalfbloodroleplay.fandom.com/wiki/Leon_Addington?oldid=1821915"
Community content is available under CC-BY-SA unless otherwise noted.