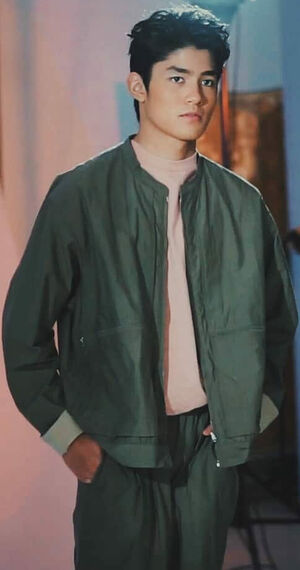 Lito is highly distrustful of organized religion, and has a hard time believing in Greek Gods. At best, they're just more powerful beings that puppet humans around. Furthermore, he’s a skeptic on many things, and doesn’t trust easily. Those he does trust, however, he’s incredibly loyal too, even when he’s in a power frenzy. He’s a street smart kid with little academic knowledge, but it’s the kind of smart he’s needed to survive. Flyboy is the life of the party like most Dionysus kids, even if he’s almost never drunk.

His humor is crude and his view of love is, as usual, skeptical. His code aligns hard with the code of his gang- 1226. 1 life 2 live, 26 to die. He’s very ambitious, and will disregard pieces of his life for his ambitious. Behind all the tough guy, he’s still a coward, and still afraid of his dead dad. While not necessarily reckless, living life to the fullest is more consequential than living life to the maximum age.

Swirling clouds of grey, thunder reverberating all around. An arched, liberated back. This is the image of Santino’s reception of communion. Santino had been a good pinoy immigrant, a good catholic boy who followed the rules, supporting his mother in America. He knew Professor Wine was some college professor in the nearby community college, and that every sunday, he would bear the wine for the mass goers to sip. As a closeted gay man, he’d always had an attraction the the black bearded teacher. Three weeks of intense eye contact and subtle touches after mass led to that moment.

Three months later, the now repentant catholic-turn Jahovah Witness received his unknowing receipt of that magical encounter. There’s no way he would have believed the kid was his, given his straight abstinence. Instead, as a loyal man of God, he took the child and “raised it as his own.”

Lito grew up in an environment of belts, fire and brimstone teachings, screams to the sky, crumbs in the fridge, and second hand clothing. Santino didn’t make much as a mover, and what money he made went back into JW charities. He spent a third of his time working, a third praying, and another third condemning his small child. Lito sucked everything in, and because of that, was made fun of for not having birthdays, for not celebrating christmas, for not rising to salute the flag. His friends never stuck around long, partially because they were afraid of his father. Like a child from an eighties movie, Lito’s favorite pastime was splashing around in puddles.

It’s easier to accept and believe parents when you’re young, but when you get push back from your community, it’s harder to hold on to the truths and lies spread at home. Lito finally made friends, the same year he stopped believing his father. Albeit afraid, with his dad becoming busier and busier, hung out more at their houses and with their families. Gangs controlled their streets, but his friends were protected. His dad had warned him away from gangs, but at seven, it all just seemed so exciting. He was tired of being left out and picked on. He wanted more, and he wanted the sort of love and acceptance that gangs offered. Not to mention, he was hungry.

He was indoctrinated then, but only became a member at ten, after eating a jar of flies for his initiation. He was no longer the weird Jaho kid. He was Flyboy, member of the Asian Boyz. People went from ignoring him out of difference, to avoiding him out of fear. Some people would agress him, but he had enough confidence to hold his own. Power felt good to him. It had been something he’d never experienced in his home, always cowering away. His ambition ignited at eleven, a boy growing up faster than a comet dashing across the sky. Like many of his mates, no one expected this comet to live long.

By the time he was thirteen, he had stolen more cars than he could count, had escaped at least four police chases, had beat up some Bloods who’d cramped up onto his territory, and had smoked barrels of weed. Leaders in ABZ trusted him so much, they’d gifted him with guns and girls. What he didn’t know, however, was that other forces needed him to grow up quicker too. He encountered his first monster at this age, a hellhound that attacked him while he was smoking a joint. All of his sensitivities felt heightened because of how high he was,and for some reason, he thought it would be best to prove his toughness and fight the beast. Lito must have shot him five times, but nothing happened. He got mauled and would have died if his near death state hadn’t triggered a fight or flight response from his powers. The hellhound suddenly felt a force of energy and went insane. In that window of time, Lito was able to crawl into a dumpster and wait it, eventually being found unconscious by someone in the neighborhood. The monster, mad, had killed itself.

With his high thc levels checked out at the hospital, Santino knew his son was up to sinful things. Lito was pulled out of school to be homeschooled by him and save him from his ways. On one hand, he was pressed by his dad. On the other, ABZ pressed him to stand up to his dad and pop him in his disrespectful back. Lito found a compromise. He finally did what he should have long ago. He ran away from home.

Now living with his crew, Lito still went to highschool, but got deeper and deeper into the organization. On top of that, more monsters began showing up. After his first experience with his possibly psychotic induced beings, he knew to run. Lito had experienced more parties than most of his schoolmates, parties that, for any other thirteen year old, would have been too much. He wasn’t hungry anymore, he had power and influence, and best of all, his dad wasn’t there. This was the stuff of his dreams.

When he was fifteen, a series of events unfolded that changed him forever. First, he had been expelled from school for fighting, which led to him being a full time ABZ member. Then, Lito finally had to use his gun for something other than shooting monster- shooting humans. Sometimes people wouldn’t respect ABZ, or they had scores to settle. This became his job. The first time he killed someone, he did a drive by on a rival gang member. It made him question his motivation for being in the gang, and left him feeling sick to his stomach. As he continued to kill for his crew, his guilt mounted, even though he knew it was a necessity for the survival of them all. It wasn’t, however, typical guilt. He felt guilty that he had stopped caring.

In school, he made a new friend, one who would soon reveal himself to be a satyr. He’s the reason why Lito isn’t in jail.

On a fateful summer day, he decided to ask for help from the one man he never should have- his father.

His father had been praying when he walked in. He had hoped for some forgiveness, or a trace of sadness. What he received was fire and brimstone. Tired of the nonsense, tired of being rejected, and frankly, getting angrier and angrier, he walked away. His father grabbed his arm roughly, then slapped his son. Lito pulled out his gun. The next things that happened felt to him like they’d happened in a kaleidoscope. Eyes wide with fear, he denounced Lito. Lito told him to back away. When Santino tried to grab his gun, Lito shot him.

His friend that was a satyr saw his wanted picture sprawled across all the news channels. The satyr thought it was the usual case of a misunderstood demigod, being put into a sticky situation by the mist. He never thought Lito had actually killed him. When he went to find Lito, and rescue him from the cops, he immediately asked if a monster had done it.

The satyr explained to him what exactly he was, and of the safe haven he could escape to. This led to them trekking across america, finally reaching camp half blood half a month after his sixteenth birthday.

</div
Community content is available under CC-BY-SA unless otherwise noted.