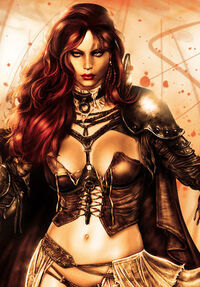 Lyssa was the goddess or daimona (spirit) of rage, fury, raging madness, frenzy, and, in animals, of the madness of rabies. The Athenians spelt her name Lytta.

Lyssa was a figure of Athenian tragedy. In Euripides she is sent by Hera to inflict Heracles with madness. Greek vase-paintings of the period also confirm her appearance in plays about Actaeon, the hunter torn apart by his madenned hounds. In this scene she appears a women dressed in a short skirt, and crowned with a dog's-head cap to represent the madness of rabies.

Lyssa was closely related to the Maniai, the goddesses of mania and madness. Her Roman equivalent was variously named as Ira, Furor or Rabies. Sometimes she was multiplied into a host of Irae and Furores. 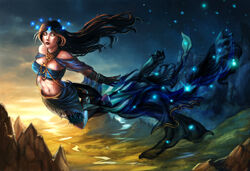 Retrieved from "https://camphalfbloodroleplay.fandom.com/wiki/Lyssa?oldid=1570782"
Community content is available under CC-BY-SA unless otherwise noted.